‘Trauma in the highest form’ The suffering, the culture of abuse and still harrowing plight of women in prison

Michigan’s only prison for women is just one out of countless prisons in the United States where Black women suffer rape and abuse whilst living in what activists describe as “inhumane conditions,” they added.

“What is happening is there are women who are being abused sexually, emotionally, mentally, spiritually,” said Shawanna Vaughn, founder and director of the Harlem-based nonprofit Silent Cry, Inc., to The Final Call.

The women at the correctional facility have been crying out for help. In May 2021, they started telling their stories to prisonradio.org, a media platform amplifying the voices of incarcerated people. When the cry reached Ms. Vaughn and Trische Duckworth, the two women immediately went to work. 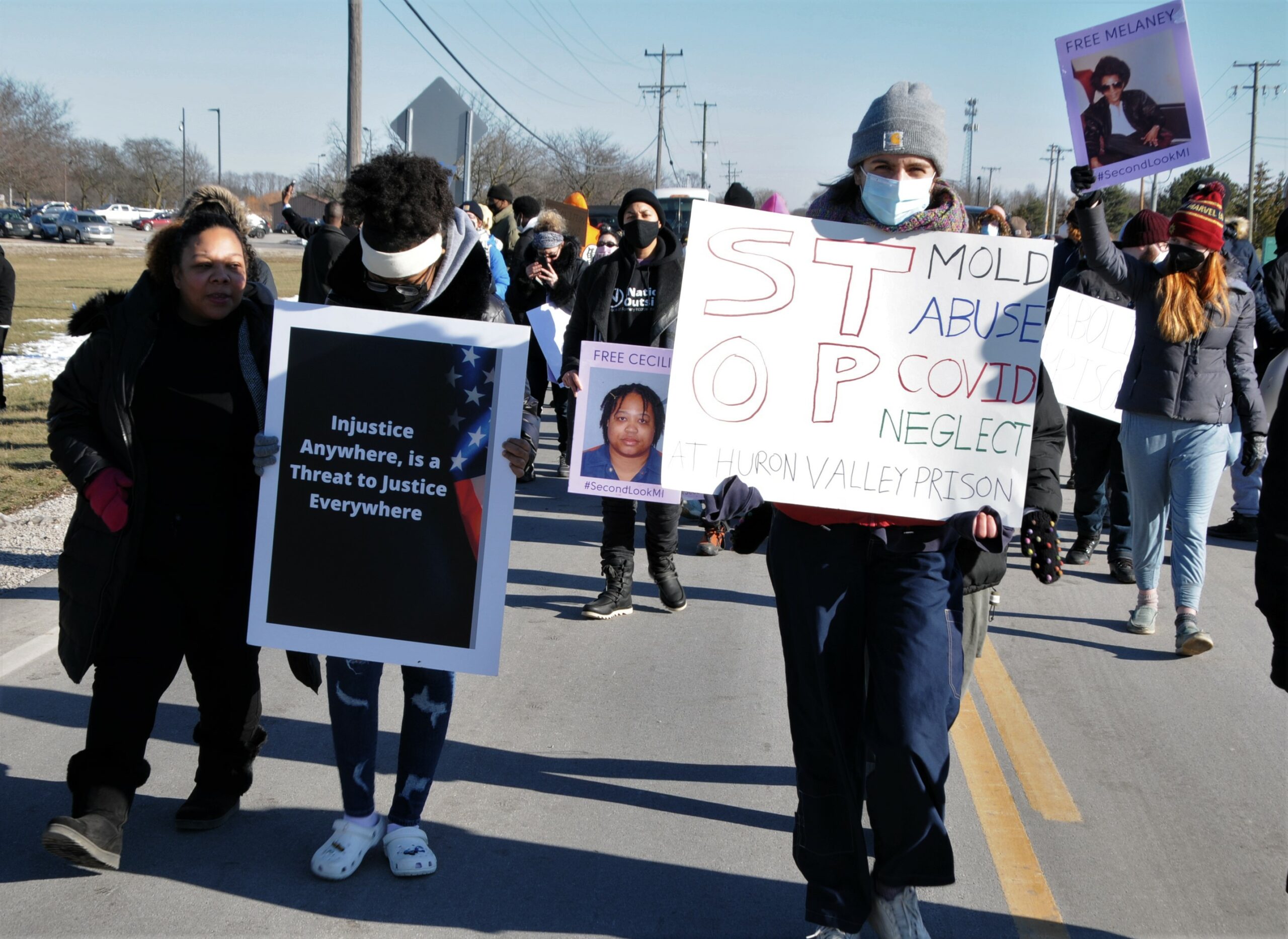 They held an initial rally on Jan. 2. A second one took place on Jan. 16, during the MLK Day weekend, “And oh my God, that rally. When I tell you that God showed up and showed out,” Ms. Duckworth described to The Final Call. “That’s all I can really say to describe it. I mean, it was sadness, but it was a moment of triumph and victory, meaning that everybody came together with one mind on one accord.”

“They literally had cars all along the side of the road as far as you could see. Because of the rape. They’re beating up sisters. Sisters have died in that prison,” said Lionel Muhammad, the Nation of Islam’s Central Regional Prison Reform Student Minister and the assistant to the Nation’s Student National Prison Reform Minister Abdullah Muhammad.

Ms. Vaughn and Ms. Duckworth put out a call for the brothers of the Nation to attend the rally, and the brothers responded. 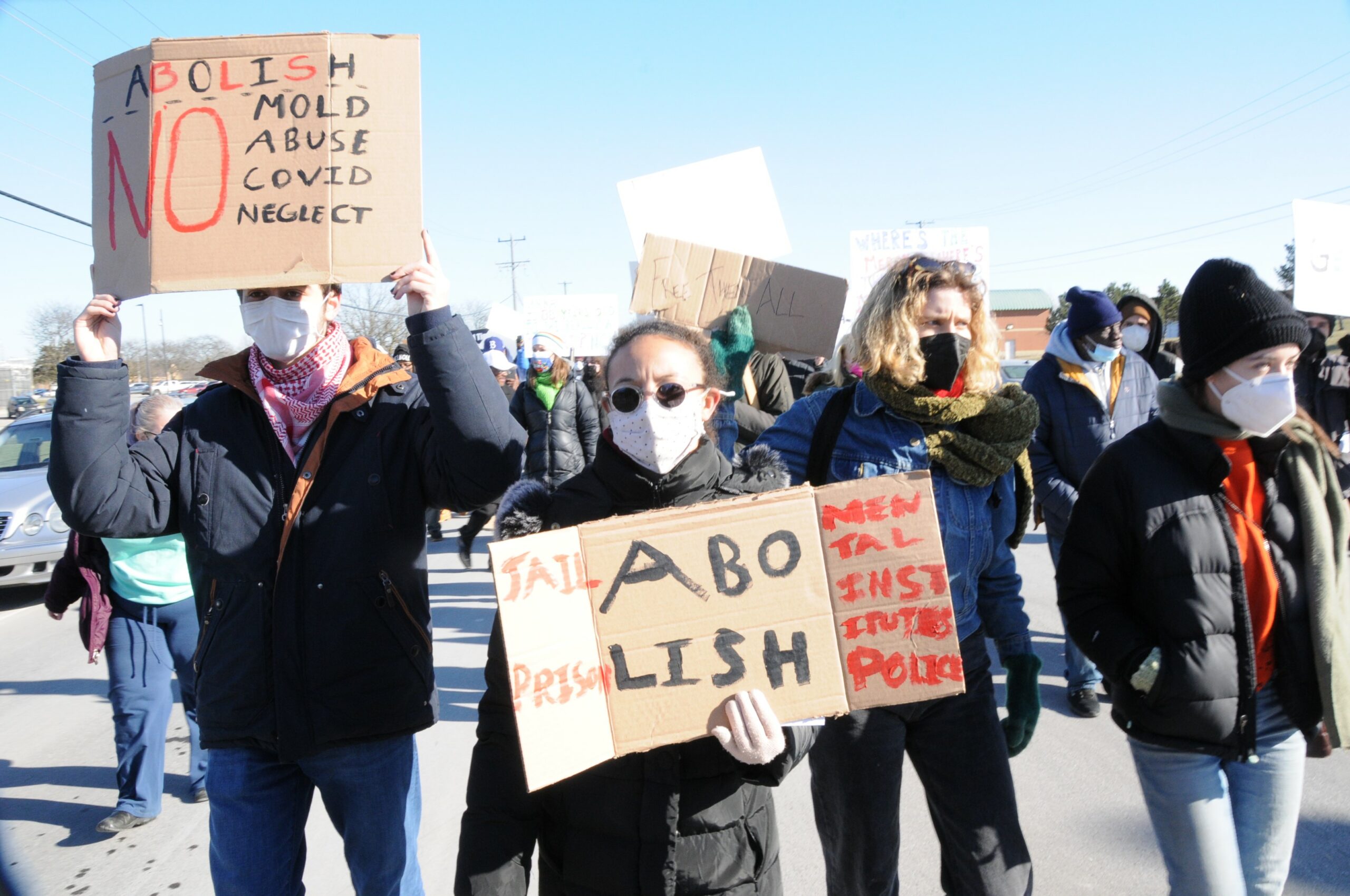 Protesters carry signs as they walk to detention center during demonstration in Michigan. Photo: Haroon Rajaee

“We wanted them to know that we love them. The Honorable Minister Louis Farrakhan loves them. And that’s why we showed up in the numbers that we showed up, to let the world know, we’re not going to let you do this to our women that are in prison,” Lionel Muhammad said.

The issues at Huron Valley

Five law firms filed a class-action lawsuit in federal court against the facility in Nov. 2019, citing overcrowding, poor ventilation, and leaky roofs contributing to chronic mold. Because of the mold, incarcerated women have said they have developed rashes, respiratory infections and other health problems. A little over $21 million in total is needed for maintenance and repairs at the prison, according to the Michigan Department of Corrections’ (MDOC) fiscal year 2023 five-year assessment plan summary. 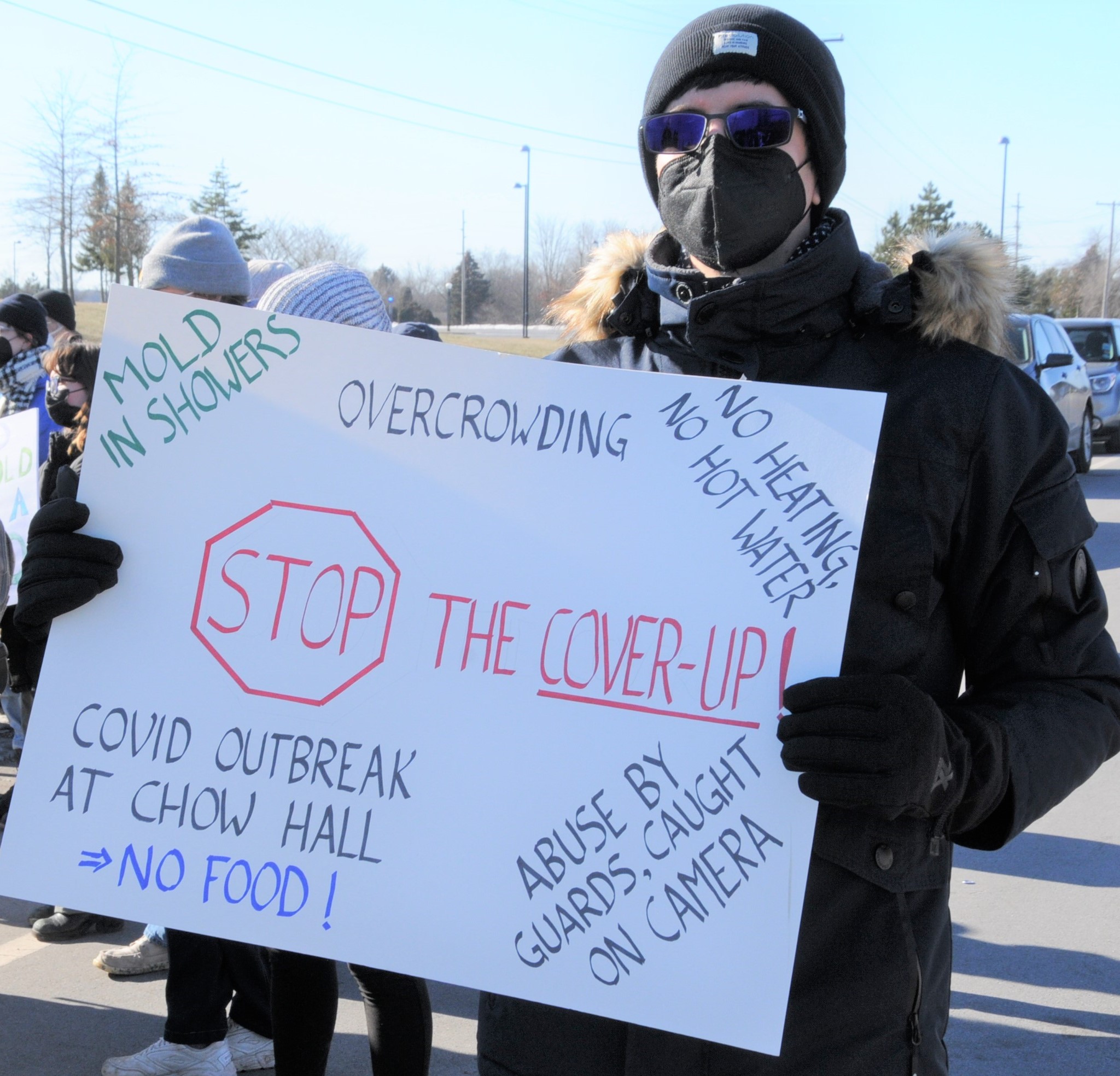 The women have also been outspoken about the prison’s culture of sexual abuse. In 2009, the state of Michigan doled out $100 million to settle lawsuits claiming male corrections officers were sexually abusing and harassing incarcerated women. Between July 2018 and June 2019, 146 women said they were sexually harassed, and 12 claimed they were sexually assaulted, according to the MDOC.

Two of the facility’s former employees stated they witnessed a culture of “rape punishment” and that guards were distributing drugs to incarcerated women. They said they were fired after trying to report the abuse.

Civil rights attorney Dionne Webster-Cox attended the rally and announced she would be taking the cases of the two former employees. She also said she is trying to find lawyers to take on the cases of the incarcerated women.

On top of mold and sexual abuse, the Covid-19 pandemic presents yet another issue plaguing the incarcerated women. As of Jan. 19, 2022, there were 276 active positive Covid-19 cases, according to the MDOC. Since March 2020, 1,076 women have tested positive, and four have died.

More than 200 people showed up at the rally that was held. “Because the conditions inside the only women’s prison in the state of Michigan are inhumane. They have bacteria infections. … They’re OD’ing off of fentanyl and opioids in a prison that is locked down with no visits,” Ms. Vaughn said. “They don’t even get mail. All the mail is photocopied. So how are they getting drugs and OD’ing if the guards are not giving them the drugs? Huron Valley is a humanitarian crisis situation.” 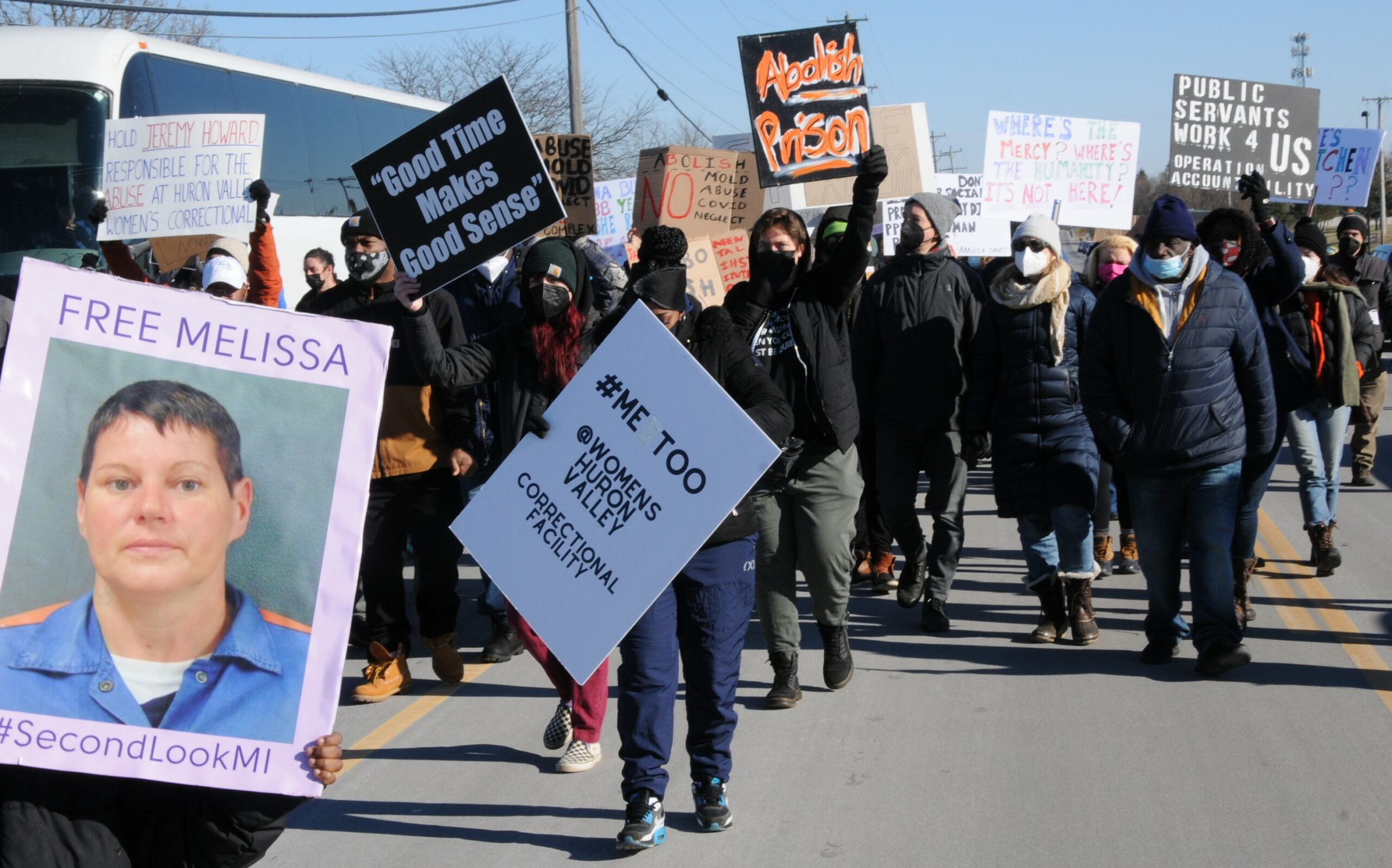 Freedom for some of the women held at detention center is needed say protesters. Photo: Haroon Rajaee

Lionel Muhammad said not only is sexual abuse common for incarcerated women, but it’s also not publicized. Karen Garrison, a media personality known as Mommie Activist, told The Final Call sexual abuse in prison has been going on for a long time.

She got involved in criminal justice advocacy after her twin sons Lawrence and Lamont Garrison were unjustly imprisoned due to harsh crack cocaine laws.

She described pictures she received from incarcerated women, showing bruises from prison guards. But, she said, because of Covid-19 prison restrictions, a lot of what’s happening is kept inside.

She explained that in many places both federally and on the state level, the abuses aren’t being documented, and some of it never gets to the prison warden.

But even when it does, “Of course they’re going to believe the authorities there before they believe the prisoner,” she said.

On Dec. 15, New Jersey’s acting attorney general Andrew J. Buck announced charges against five defendants in an investigation at Edna Mahan Correctional Facility, the state’s only prison facility for state-sentenced women prisoners. In total, 15 defendants have been charged in what the office says is an ongoing investigation.

An April 2020 report by the Justice Department found that there was “reasonable cause” to believe that conditions at the facility “violate the Eighth Amendment of the United States Constitution due to the sexual abuse of prisoners by the facility’s staff.”

The report states that “from October 2016 to November 2019, five Edna Mahan correction officers and one civilian employee were convicted or pled guilty to charges related to sexual abuse of more than 10 women under their watch.”

One sentencing judge called the culture at the facility “pervasive;” another court concluded that an officer “sexually assaulted a vulnerable population.”

Last year in July, the Federal Bureau of Prisons reached a monetary settlement with 14 women. The women reported that they were sexually abused and assaulted by guards while being held at the Federal Correctional Complex Coleman in Florida.

Some women who are sexually abused are also impregnated, such as Anquanette Woodall, a Black woman who was raped by a Florida prison guard, Travis Hinson, at the Gadsden Correctional Facility, a private facility for women. The officer was arrested and charged with rape.

In 1984, 17-year-old Machelle Pearson was sentenced to life in prison without the chance of parole. While behind the bars of the Women’s Huron Valley Correctional Facility, she was raped and impregnated by a guard.

Like interviewees said, these incidents are not new. On Dec. 31, 1904, a 28-year-old Black woman was convicted of “assault to murder” and sentenced to three years. She was transported from a state prison to a privately operated plantation. There, “she labored from ‘sun to rain, rain or shine’ in the fields, under the watchful eye of temperamental guards and observed as the men unleashed their reign of terror and violence on the other female inmates—when she wasn’t a recipient of it herself,” according to a research article titled “‘Under the Sting of the Lash’: Gendered Violence, Terror, and Resistance in the South’s Convict Camps” by history professor Talitha L. LeFlouria.

She describes how Black women were “subjected to fiendish acts of physical cruelty, often of a sexualized nature, and raped with impunity.”

More than 60 percent of women in state prisons have a child under the age of 18, according to The Sentencing Project. Federal data states that at least five million children nationwide have a parent in jail or prison, with Black children being disproportionately affected.

Though Ms. Pearson was later able to reconnect with her son, she described the pain she felt behind bars to the Detroit Metro Times. “Mentally and physically and spiritually, it will break you,” she said. “It’s traumatic. The bond is totally broken. It really hurt me. I didn’t understand. That was my first child. It was like being traumatized all over again.”

Ms. Garrison recounted being away from her children as she served 18 months. She was able to do a few home visits, where she was allowed a few days with her family. One of her children broke down crying, and she described that maybe they were fearful she would not come back.

Ms. Vaughn’s birth certificate says prison. She knows firsthand what having an incarcerated mother does to the family. She herself is formerly incarcerated, and two out of her three siblings have been to prison.

Ms. Vaughn and Ms. Duckworth both named Ryan Correctional Facility, which was renamed the Detroit Reentry Center, as a facility women could be put in as a Covid-19 safety measure. Ms. Vaughn is also advocating sending home women who have less than a year to their sentence left and commuting the sentences of aging women.

Ms. Duckworth explained that part of the rally was to focus on state Senate Bill No. 487, which would create an oversight advisory committee for the Women’s Huron Valley prison. The bill is currently in the judiciary committee. Though, she said, “the first thing that really needs to be done is all these carceral systems need to be ended.”

Ms. Duckworth is the founder and executive director of Survivors Speak. She and Ms. Vaughn commended the brothers of the Nation for leading the front line of the rally and for speaking on the program.

“The more hands we get on deck, the more people we get pushing back, the more that we will see change. And if we don’t see change, then we’re going to start going against these legislators that are not doing what they’re supposed to do, because that’s where it starts. We need laws put in place that protect detained citizens,” Ms. Duckworth said.

“The Honorable Minister Louis Farrakhan said to adopt an inmate,” he said.

He said he asked the Minister why he told march goers to adopt an inmate. According to Lionel Muhammad, the Minister responded, “That’s a whole ‘nother world that we’re disconnected from.”

“If everybody adopts an inmate and we do it in a unified manner, then we’re connected to that world and we change the reality of this world,” he quoted the Minister.