‘How many more losses must we mourn?’
By Anisah Muhammad, Contributing Writer
- April 13, 2021 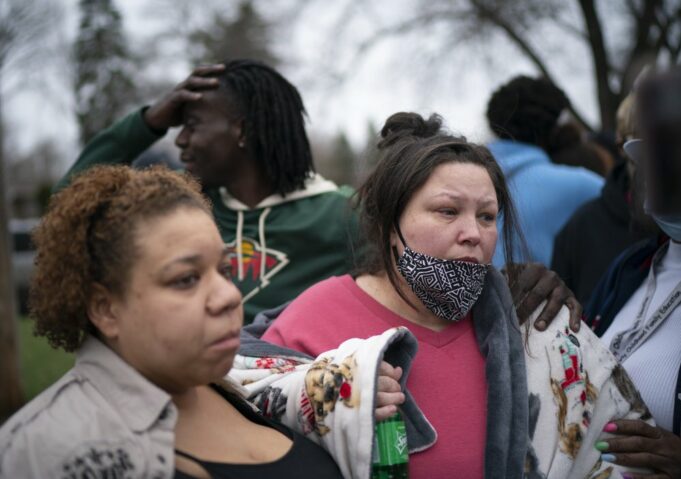 Friends and family comfort Katie Wright, right, while she speaks briefly to news media near where the family says her son Daunte Wright, 20, was shot and killed by police April 11, in Brooklyn Center, Minn. Photo: Jeff Wheeler/Star Tribune via AP


Tension is high in Brooklyn Center, Minn., with the death of 20-year-old Daunte Wright, a Black man was shot to death by a police officer in the Minneapolis suburb during a traffic stop.

His death sparked protests over two days with officers in riot gear clashing with demonstrators, sometimes outside the Brooklyn Police Department headquarters.

Protestors faced off with police in an evening confrontation that included heavily armed state troopers massed in the streets, firing gas cannisters as protestors gathered in the streets, sometimes throwing things at officers in riot gear, at Final Call presstime. Protesters refused to obey a curfew imposed by Minnesota’s governor as they demanded justice and condemned the death. Officers started to arrest those who refused to leave the area, CNN reported.

The Brooklyn Center police chief said April 12 the shooting was “accidental,” and an experienced officer fired her service weapon but meant to fire a Taser. Her Taser, however, he admitted was on the opposite side of her body. The officer involved was later identified as 26-year veteran Kim Potter by the Minnesota Dept. of Public Safety.
Advertisement

Police body cam footage captured the incident and was broadcast around the country. Outrage was immediate.

“The climate is almost spontaneous, now. If you kill one of us, we will come out of our houses from everywhere. We are so pissed, so angry, so hurt and so tired, and a matter of seconds with social media, electronics, we will be there, our people,” Harry “Spike” Moss, a longtime Minneapolis-based activist, told The Final Call.

“They are that tired. Men, women and children. Our children are traumatized, now, in Minnesota. Every time they turn the TV on, they see themselves being killed. They see, how do we go play, how do we go to the park, how do we go to school. These people are stalking us and hunting us like they’re hunting in the woods and using any excuse to pull us over and kill us.” 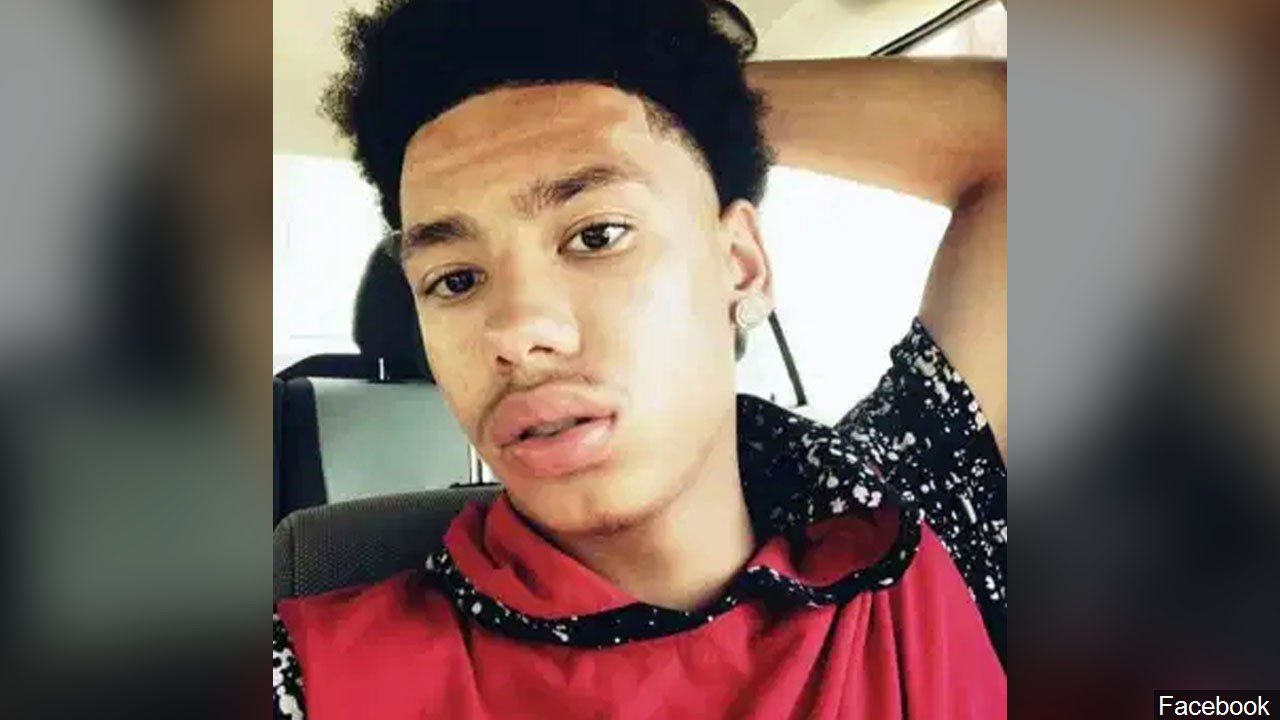 Duante Wright, who was shot and killed by Brooklyn Center police during a traffic stop. Photo: MGN Online

Activists said police had trouble getting the story straight about why Daunte Wright was pulled over.

Initially, Mohamed Ibrahim, the deputy director of CAIR-Minn., said they were told by officials that Mr. Wright was pulled over due to air fresheners. “And then earlier today when we met with city officials, they were telling us that it was a traffic stop, but they weren’t telling us the details why, although they were able to make one phone call to tell us that it was because of expired tags,” Mr. Ibrahim told The Final Call.

He said during a protest the day of the shooting, police fired tear gas at children who were grieving.

Brooklyn Center Police Chief Tim Gannon spoke to the media April 12 and police video was shared. An officer Potter can be heard shouting, “Taser! Taser! Taser!” After firing a single shot from her handgun, the car sped away, and the officer is heard saying, “Holy (expletive)! I shot him.” The bodycam footage also showed three officers around a stopped car.

When an officer attempts to handcuff Mr. Wright, who had exited his car, a struggle ensues. Authorities said the car was pulled over for having expired registration and after determining the driver had an outstanding warrant, officers tried to arrest Mr. Wright.

When Mr. Wright managed to break free and reenter his vehicle, the officer fired, striking him. The vehicle traveled several blocks before hitting another vehicle. A female passenger, identified as Daunte Wright’s girlfriend, sustained non-life threatening injuries in the crash.

Protests erupted shortly after the shooting, and demonstrators jumped on top of police cars, confronting officers. Marchers also threw rocks and other objects at officers, Minnesota Department of Public Safety commissioner John Harrington said at a news conference. He said about 20 businesses had been broken into.

“All the violence, if it keeps going, it’s only going to be about the violence. We need it to be about why my son got shot for no reason,” Katie Wright, Daunte’s mother, said to a crowd near the shooting scene. “We need to make sure it’s about him and not about smashing police cars, because that’s not going to bring my son back.”

Ms. Wright said her son called her as he was getting pulled over. “All he did was have air fresheners in the car and they told him to get out of the car,” she said. During the call, she said she heard scuffling and then someone saying “Daunte, don’t run” before the call ended. When she called back, her son’s girlfriend answered and said he had been shot.

President Joe Biden was briefed on the April 11 shooting, and the White House has been in touch with the governor, mayor and local law enforcement, White House press secretary Jen Psaki said. “We were incredibly saddened to hear about the loss of life at the hands of law enforcement in Minnesota yesterday,” she said.

The National Guard was activated, and Brooklyn Center Mayor Mike Elliott announced a curfew in the city that expired at 6 a.m. Apr. 12.

“Here’s a kid who you want to stop because he had some air fresheners around the mirror? That’s all you got to do, with the crime in this country? And then you claim he had a warrant. Well even if he had a warrant, there’s no capital punishment in this state and a whole lot of other states don’t have it,” Mr. Moss said.

“And if you have to put in place capital punishment, there has to be a jury and a judge, a hearing and a trial. None of that happened, because you still feel the Black man in America has no rights as a citizen, a human being or taxpayer that the White majority must respect.”

He said once the Covid-19 pandemic is over, he wants to invite the Honorable Minister Louis Farrakhan of the Nation of Islam to be a part of a day of remembrance and healing.

“Because we are in that kind of pain. When I walk around now, I see it on their faces. If they happen to see it on TV in a business place or something, they tear up,” he said. “If they bring it up to me and I try to respond, they cry, and we need remembrance and healing. It’s real bad here, now. This kid is just one more of many. Minnesota can’t hide it no more.”

Black Visions Collective, a nonprofit organization based in Minneapolis, Minn., sent a statement to The Final Call.

Miski Noor, co-executive director for Black Visions, said in the statement, “How many more losses must we mourn? The pain of George Floyd’s shooting is still scarred into our minds and yet history continues to repeat itself because of a rotten and racist institution. For too long, law enforcement and the legal system have continued to racially profile, harass, arrest, and murder Black people more harshly than the rest of America.”

“Our community has reached its breaking point; we are tired of rogue police departments operating with little to no accountability and oversight. Again and again, they show us that every police department across Minnesota and this country is full of Derek Chauvin’s,” she continued.

“Black people should not have to worry about being murdered just because we choose to live; whether it is to go jogging, or out to buy personal items, or just because we are sleeping in our homes—we are fighting for a world in which these situations do not end in a death sentence for Black people.”

Black Visions organizers coordinated with George Floyd Square to host a vigil on April 12 at the site where Daunte Wright was killed.

Mr. Ibrahim said there needs to be 110 percent transparency when Black and Brown people are killed. He also stated that the system is beyond reform.

“We need a completely new system because, as we are mourning and going through the trial of George Floyd, we had another Black man murdered miles away from where George Floyd (was) murdered. So in order for us to continue to heal, we need to actually have a system that is protecting Black bodies, because right now we are mourning a death … that resulted from expired tags,” he said.

“Which, we are in the middle of a pandemic. And if his tags are expired, you don’t get those sent to you in months. So in order for us to prevent these things from happening, we need to reimagine policing as a whole, because as it stands right now, it is not working, and it will continue to not work.”

(The Associated Press contributed to this report.)
Posted by Muhammad's Study Group of Grand Rapids, Michigan at 9:44 PM