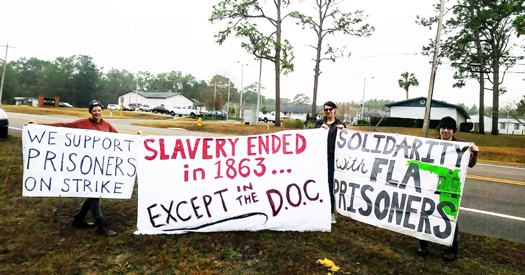 Supporters of Florida’s prison strike in January. Photo: @IWW_IWOCTwitter Men and women behind bars in the U.S.—at great risk to their personal safety—began a national prison strike to protest inhumane living conditions, brutal and abusive prison guards and what they contend is modern-day slavery.Representatives of the striking prisoners said inmates in institutions across 17 states are taking part in the strike action by refusing to work anywhere in prison buildings, kitchens, laundries and on prison grounds. Palestinian inmates have expressed solidarity and about 300 prisoners in Nova Scotia, Canada, joined the strike. The 19 days of peaceful protest was organized largely by prisoners themselves, said a spokesman for Jailhouse Lawyers Speak (JLS).“Fundamentally, it’s a human rights issue,” read a Jailhouse Lawyers Speak statement released before the strike. “Prisoners understand they are being treated as animals. Prisons in America are a warzone. Every day prisoners are harmed due to conditions of confinement. For some of us, it’s as if we are already dead, so what do we have to lose?”The strike which started Aug. 21 is organized by an abolitionist coalition that includes Jailhouse Lawyers Speak, the Incarcerated Workers Organizing Committee (IWOC), the Fire Inside Collective, Millions for Prisoners and the Free Alabama Movement. Jailhouse Lawyers Speak activists began preparing the action in April after prison officials in South Carolina put rival gangs in the same dormitory which ignited an outbreak of violence leaving seven inmates dead. (See Final Call Vol. 37 No. 40).“We want to note that although there aren’t widespread reports of actions coming out of prisons, people need to understand that the tactics being used in this strike are not always visible,” said Jared Ware, during an August 22 press conference call. “Prisoners are boycotting commissaries, they are engaging in hunger strikes which can take days for the state to acknowledge, and they will be engaging in sit-ins and work strikes which are not always reported to the outside. As we saw in 2016, departments of corrections are not reliable sources of information for these actions and will deny them and seek to repress those who are engaged in them.
“We have spoken with family members who have suggested that cell phone lines may be being jammed at multiple prisons in South Carolina, and New Mexico had a statewide lockdown yesterday. The departments of corrections in this country are working overtime to try and prevent strike action and to try and prevent word from getting out about actions that are taking place.” 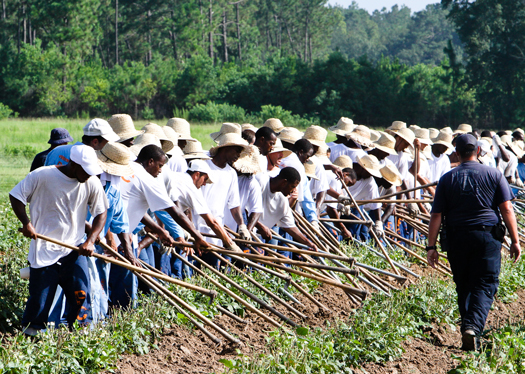 Prison guards oversee prisoners working in one of the gardens at C.Paul Phelps Correctional Center in DeQuincy, La., Aug. 8, 2010. Over 30 acres are farmed at Phelps growing vegetables for the 942 inmates. Photo: AP/Wide World photos Mr. Ware, a freelance journalist who asked to be part of a team that coordinated with the press, said inmates organized nationally and carefully crafted the demands, strategically whittling them down from 35 to 10. The decision to strike, he said, was prompted by the deadly circumstances at South Carolina’s Lee Correctional Center, an understanding of how the state brings about the conditions of violence like that, and the types of changes that are necessary to prevent a repetition of that sort of violence.“This is a human rights campaign and each of these demands should be understood through a human rights lens,” inmate representatives said.The demands include:An immediate improvement of conditions and the implementation of policies that recognize the humanity of men and women;A greater investment in mental health services for prisoners;Rescinding the Truth In Sentencing Act and Sentencing Reform Act to increase the possibility of inmates receiving rehabilitation and parole. No human should be sentenced to death by incarceration or no sentence should be imposed without possibility of parole;An immediate end to prison slavery, with inmates paid the prevailing wage in their state or territory;Rescinding the Prison Litigation Reform Act to give the incarcerated a proper channel to address grievances and rights violations,An end to “racial overcharging, over-sentencing, and parole denials of Black and Brown humans.” In addition, “Black humans no longer (being) denied parole because the victim was White, a particular concern in Southern states.” Although the United States represents one-fifth of the world’s population, 2.3 million people are incarcerated in America, the highest in the world. Estimates are that about 60 percent of that population is Black or Latino. Those numbers could ratchet up with Attorney General Jeff Sessions, at the behest of President Donald Trump, relaunching the failed “War on Drugs” and giving state attorneys and law enforcement the green light to crack down on criminal suspects even for non-violent crimes.Prison reform advocates and critics of the criminal justice system note that the Prison-Industrial Complex is a multi-billion dollar enterprise which relies heavily on prison labor to work and produce goods and services for major businesses and corporations including Whole Foods, Starbucks, McDonalds, WalMart, Victoria’s Secret and AT&amp;T.The Prison Industrial Complex is a more than $2 billion enterprise, but many inmates literally work for pennies and others labor for free, said Dr. Kim Wilson.“Exploitation of prison labor is at the heart of this strike,” said Dr. Wilson, a California resident and prison abolitionist. “Some people are making zero. I don’t want people to get the idea that it’s an at-will job. It isn’t a system where people have a choice to work. And nearer to the release date, you are expected and required to work.”“At the largest wildfire in Mendocino County, thousands of inmates are fighting the fires. The reason is to save property. Prison officials try to sell the idea of this being rehabilitative but that’s not true.”Dr. Wilson cited examples nationally of the work inmates are forced to do. In Angola Prison in Louisiana—often characterized as perhaps the most brutal prisons in the United States— inmates train and breed thoroughbreds and others pick cotton on the farm. Inmates in other institutions work on pepper and strawberry farms, she said.“You also have prisoners building furniture for schools and universities, sewing Little League team uniforms and making military equipment, like helmets,” said Dr. Wilson, who has two sons serving life sentences at Vaughn Correctional Facility in Delaware. “This is not a small operation.”
Abdullah Muhammad, the Nation of Islam’s National Prison Reform Student Minister, said he hopes the strikes don’t end as tragically as it did at Attica in 1971 when prison guards killed a number of inmates. He added that he doubts how successful the strike will be because of the traditional recalcitrance of prison officials. 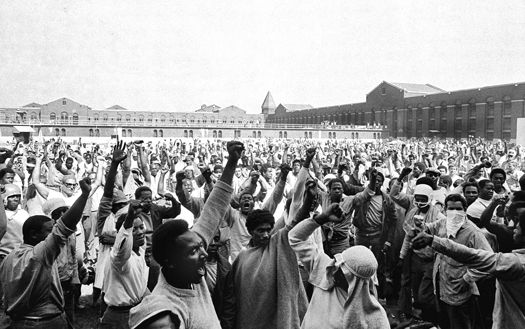