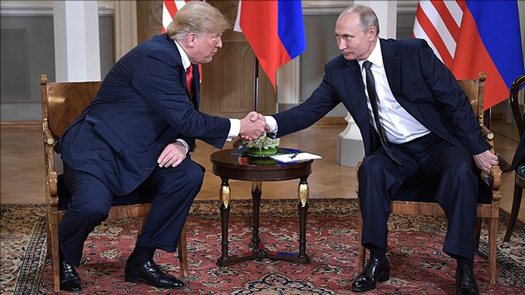 President Trump and President Putin at the Presidential Palace in Helsinki, Finland. Photo: MGN Online HELSINKI, Finland—President Donald Trump said the Russia investigation has been a “disaster” for the United States and has kept America and Russia “separated.” Speaking during a joint news conference with Russian President Vladimir Putin, he reiterated that there was “no collusion” between his campaign and the Russian government. Mr. Trump departed the summit without holding the Russian leader accountable for meddling in the 2016 U.S. presidential election. “I hold both countries responsible. I think that the United States has been foolish. I think that we’ve all been foolish. We should have had this dialogue a long time ago, a long time, frankly, before I got to office,” Mr. Trump said standing with Mr. Putin in a closing press conference.
Offered opportunities multiple times to denounce Russia’s actions, Mr. Trump instead placed blame on the FBI and said that he had “confidence” in both parties—the intelligence community and Russia, CBS News reported. 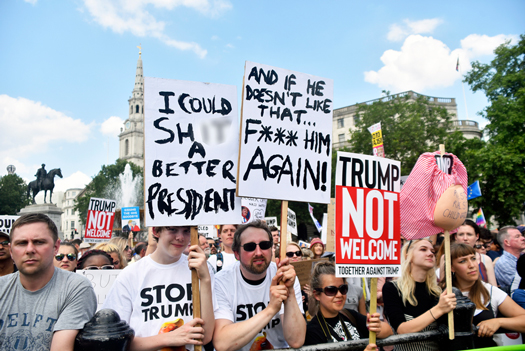 Demonstrators gather at Trafalgar Square as they attend a rally against the U.S. President Donald Trump’s visit to the UK, including a giant infl atable Baby Trump, in London on July 13. The President of the United States and First Lady, Melania Trump, visited Prime Minister Theresa May at Chequers and had tea with the Queen at Windsor Castle. Photo: AP/Wide World photos “All I can do is ask the question—my people came to me, Dan Coats came to me and some others, they said they think it’s Russia. I have President Putin he just said it’s not Russia. I will say this, I don’t see any reason why it would be but I really want to see the server but, I have confidence in both parties,” Mr. Trump said. CBS reported the president went so far as to say that Mr. Putin’s denial of having been involved in the election was “extremely strong and powerful.” Mr. Putin reiterated past claims that the “Russian state” has never and is not going to ever interfere in U.S. internal affairs, including elections, and offered to allow Special Counsel Robert Mueller an opportunity to request to interrogate and question 12 Russian nationals indicted in his probe on Russian soil. Mr. Trump hailed the summit as being a success after dialogue between the two nations following a private one-on-one discussion that lasted two hours, said CBS. Mr. Trump blasted the European Union as a “foe” before the Putin meeting and ignored calls from his national security team to “adopt a more hawkish tone towards Russia going into the summit.” Democrat Adam Schiff blasted the American president for a “cowardly surrender of American interests” on CNN. The congressman condemned the president for a “despicable act of betrayal of the United States” and branded the Republican Party as “complicit in the surrender to Russia of American interests.” Chuck Schumer questioned why the president put Russia’s interest over the United States saying the only possible answer is that Russia’s president has something on Mr. Trump. The leading Democrat in the Senate denounced the summit and press conference as “shameful.” A tweet from Arizona Republican Jeff Flake also called the press conference “shameful.” House Speaker Paul Ryan (R.-Wisc.) declared there was “no question” that Russia interfered in U.S. elections and congressional committees and intelligence agencies had both agreed on that. The president was widely blasted for undercutting U.S. intelligence and believing Mr. Putin, a former KGB agent. 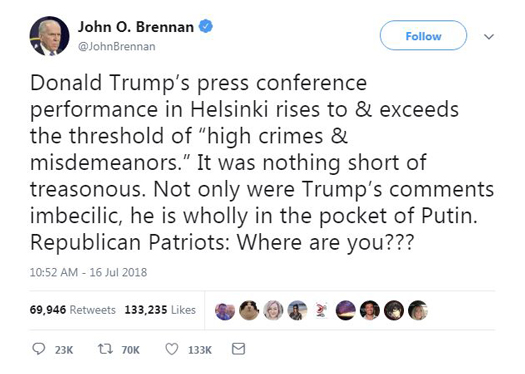 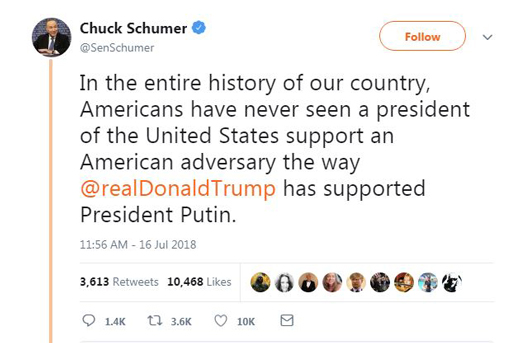 “Donald Trump’s press conference performance in Helsinki rises to & exceeds the threshold of ‘high crimes & misdemeanors.’ It was nothing short of treasonous. Not only were Trump’s comments imbecilic, he is wholly in the pocket of Putin. Republican Patriots: Where are you???” tweeted John Brennan, CIA director between 2013 and January 2017. He also blasted the president’s words as “treasonous.” Sen. Schumer called for GOP support of the special counsel’s investigation of Russia’s election role. He also called on Republicans to demand that the indicted Russians be sent to the U.S. to stand trial, that sanctions be ratcheted up and that Mr. Trump appear before the Mueller probe. Mr. Putin rejected claims that his government interfered in the U.S. election. There’s “no evidence when it comes to the actual facts,” he said. “Our relationship with Russia has NEVER been worse,” Mr. Trump tweeted early July 16, blaming “many years of U.S. foolishness and stupidity and now, the Rigged Witch Hunt!” Russian Foreign Ministry rejected the U.S. indictment as part of a “shameful comedy” they claim has been staged to prevent the formalization of Russia-U.S. ties. (Compiled from Final Call staff and Associated Press reports.)