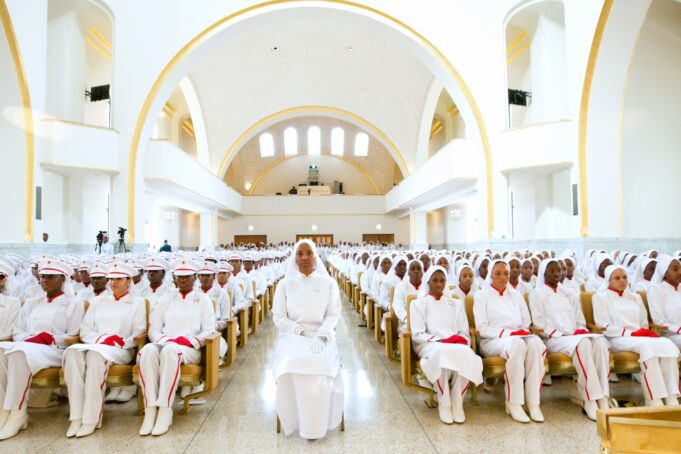 ROSEMONT, Ill.—In a world that is so contrary to decency, righteousness and that portrays the Original Black woman in such a negative light, the class of all classes, the National M.G.T. and G.C.C. Vanguard, showed and proved why what is offered through the Teachings of the Most Honorable Elijah Muhammad, under the direction of the Honorable Minister Louis Farrakhan, is so necessary and needed.

The great movement of young, Muslim women flocked to this suburb of Chicago for the national M.G.T. and G.C.C. Vanguard Retreat 2022. It was a historic occasion filled with education, rejuvenation, and fun.

“M.G.T. and G.C.C.” is Muslim Girls Training and General Civilization Class, a class designed in part to retrain Black women and girls into the thinking and will of God through the study of seven training units set up by the founder of the Nation of Islam, Master W. Fard Muhammad, the Great Mahdi. 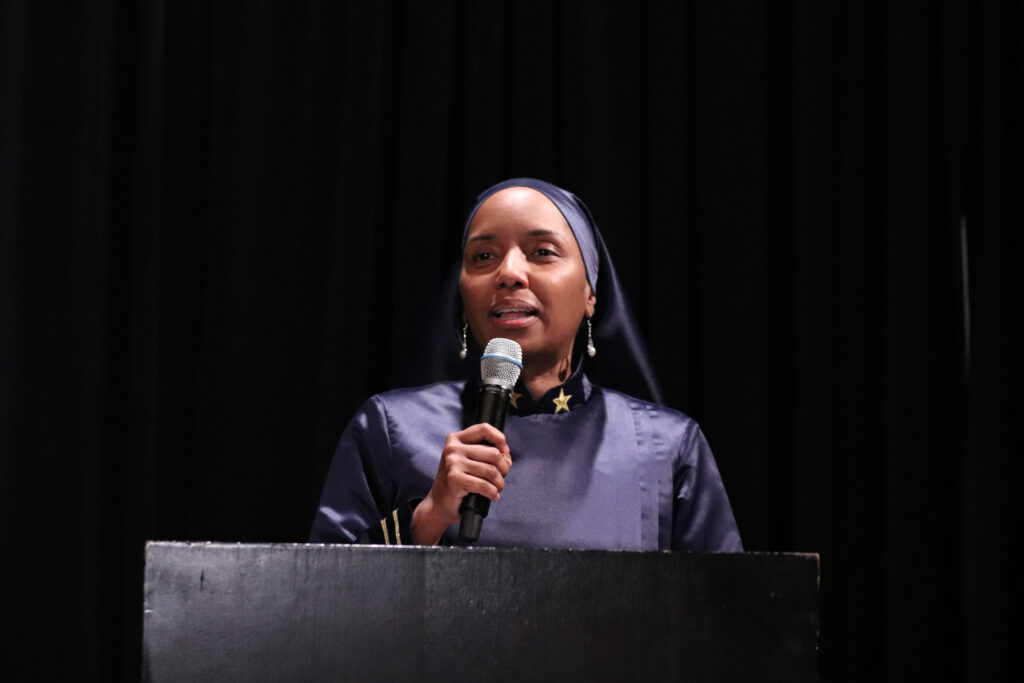 Student National M.G.T. and G.C.C. Captain Naeemah Muhammad and her staff worked for months to empower the women who traveled from far and wide to gather in unity as a sisterhood.

“We have so much to be joyous over. And I want each and every one of us to be encouraged,” stated Sister Naeemah Muhammad during the opening session. “We have a lot to be happy over. We, sisters, are right at the edge of the precipice of this world going out, in the birth of a New Kingdom, the Kingdom of Allah (God). 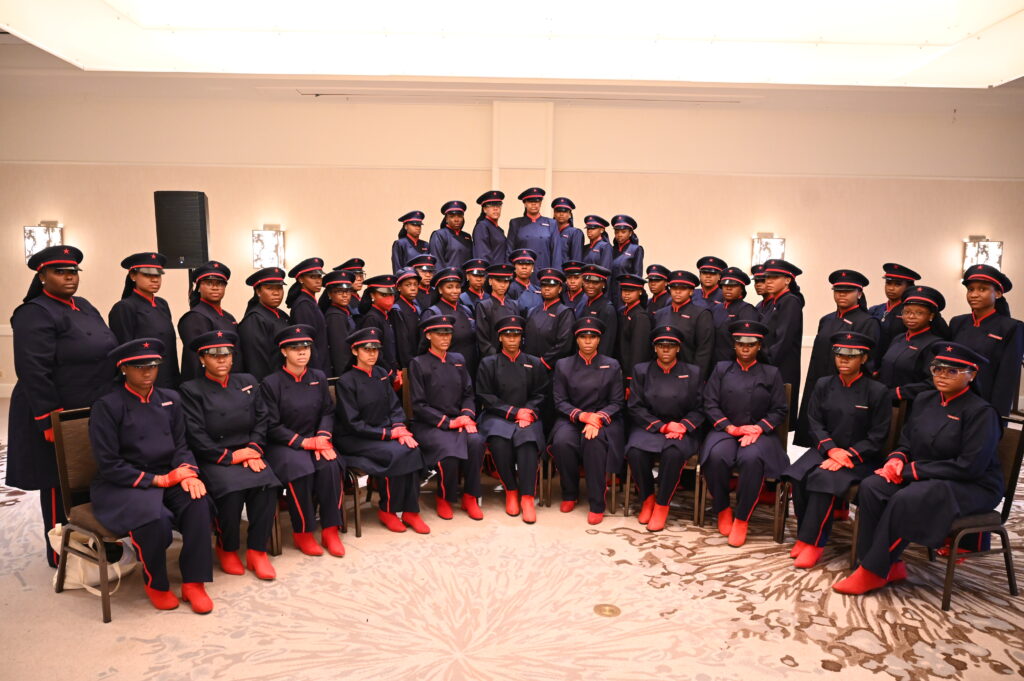 While we are feeling the birth pains of living in the hell of North America, in just a little while, we will have the joy of new life that is ever increasing and in abundance,” she told the ballroom filled with bright minds, including M.G.T. hostesses, who helped to make the retreat, held Sept. 15-18, a memorable occasion for participants.

The vibrant, attentive students answered the call and invitation by Minister Farrakhan, who gave his divine guidance on the role and power of the woman. 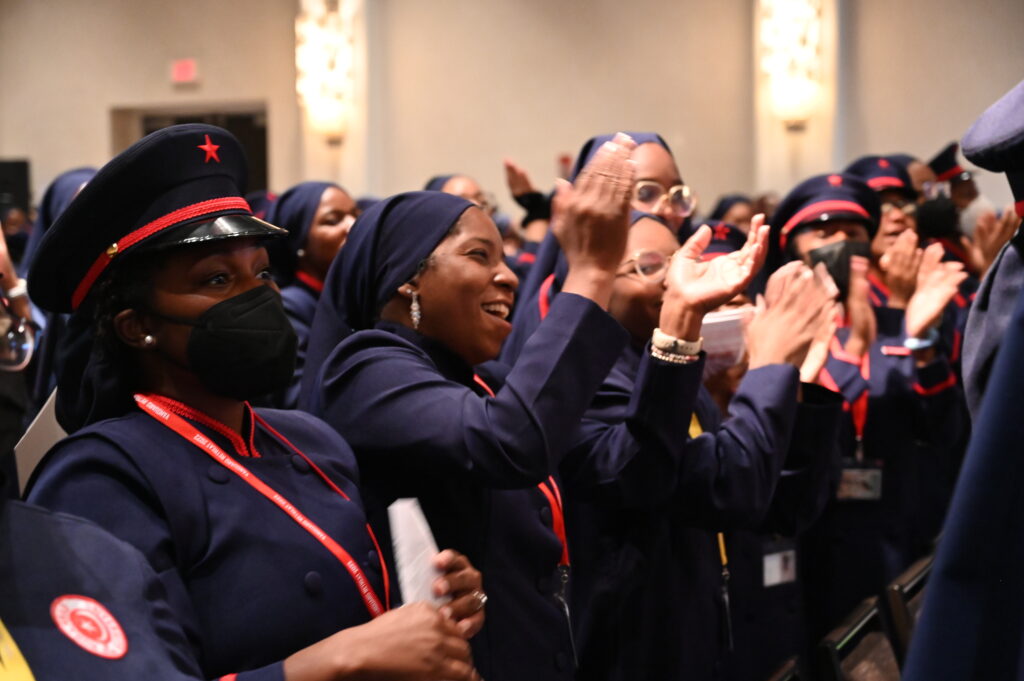 The historic weekend included special treats, such as field day exercises, workshops and presentations and a barbecue, during an outing to The Michigan Farm.

The gathering provided an opportunity for participants to be reacquainted with the purpose of the class and reminded of the vision of what Minister Farrakhan desires for the M.G.T. Vanguard during a special in-person message to attendees.

Many sisters shared that they openly wept and were very emotional throughout the weekend, as their spirits were lifted, particularly when Minister Farrakhan addressed them. 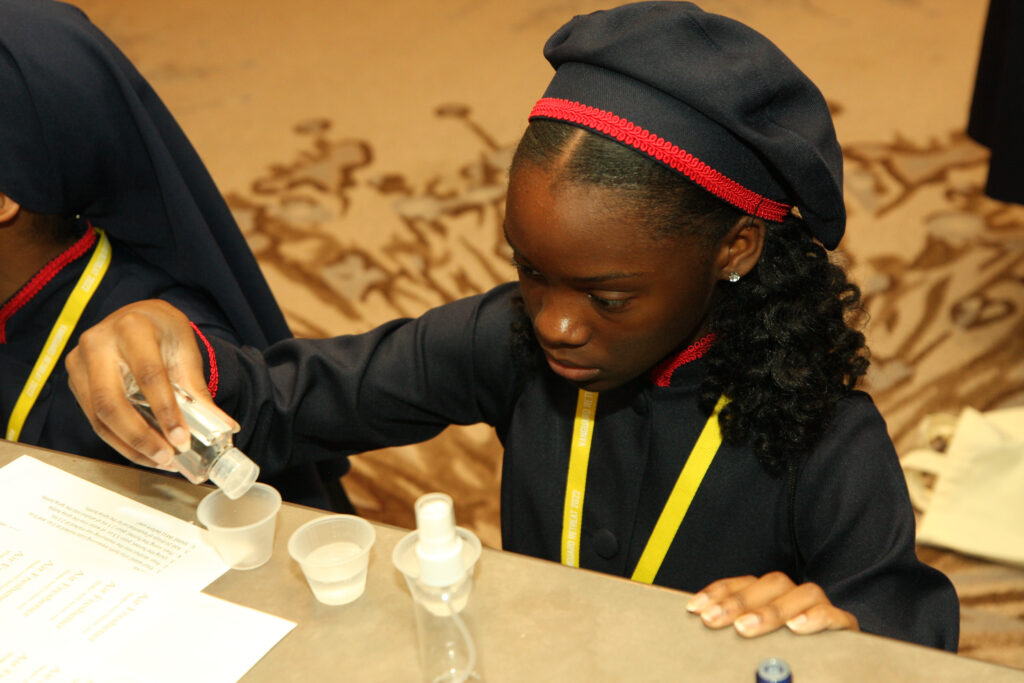 “In this stage of our lives, as young Vanguard, young women, a lot of things need to be solidified like decisions that need to be made for the rest of our lives. Sometimes when there’s confusion, it’s very stressful to go through, so in prayer, and going to the retreat and striving to want to do better and then your words, literally in short words, saved my life,” stated 21-year-old Amirah Muhammad.

Sister Taylor X, 26, from Muhammad Mosque No. 60 in Nashville, Tennessee, felt honored and privileged to have Minister Farrakhan speak to the sisters and to be present at the retreat. 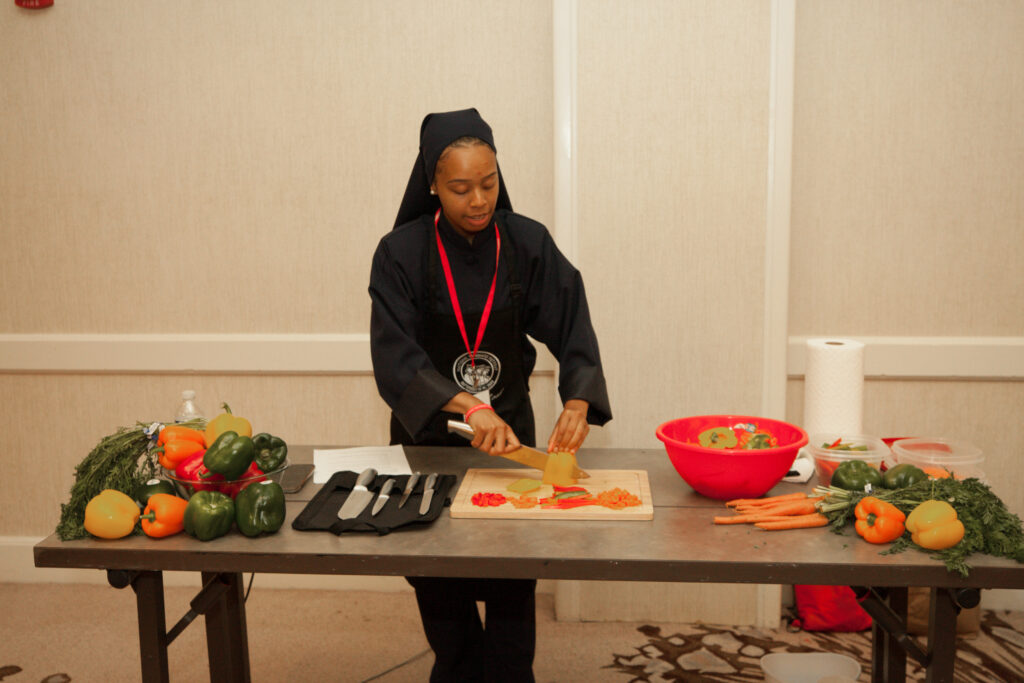 “I was grateful beyond anything else that Allah picked me to be a soldier in this army,” she said.

Sister Taylor X shared that she is approaching her first year of being in the Nation of Islam. She enjoyed the high spirits of the sisters who attended the retreat and the leadership of Student National M.G.T. Captain Naeemah Muhammad, Student Southern Regional M.G.T. and G.C.C. Captain Nusaybah Muhammad and other student regional captains and M.G.T. staff who planned, coordinated and worked so hard to make the retreat a success. 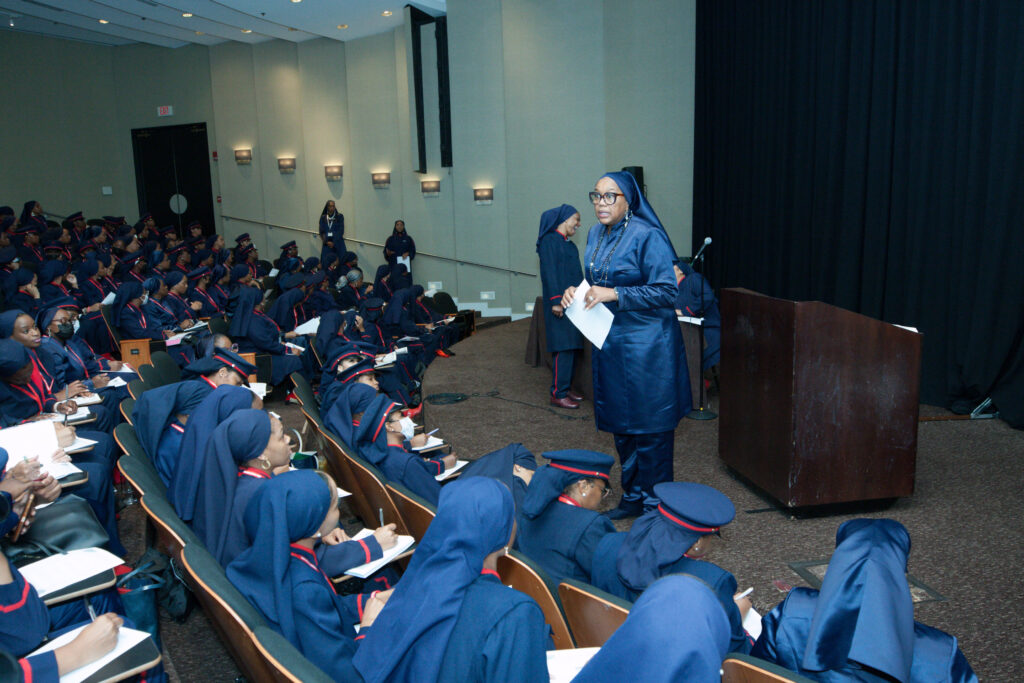 Sister Khadeeja Muhammad from Muhammad Mosque No. 15 in Atlanta described her experience at the retreat as “overwhelming in a good way,” from the workouts to the Minister’s reminders. “It just stamped in my mind that it’s really time for us to get it together and really be the voice of this new world that Allah is trying to use us to bring in,” she said.

Sister Ameera X Davis, 22, from San Francisco, California, enjoyed the sisterhood she experienced at the retreat. She originally wasn’t going to attend, but a meeting about it lifted her spirits and sparked within her the desire to be present. She overcame all obstacles. 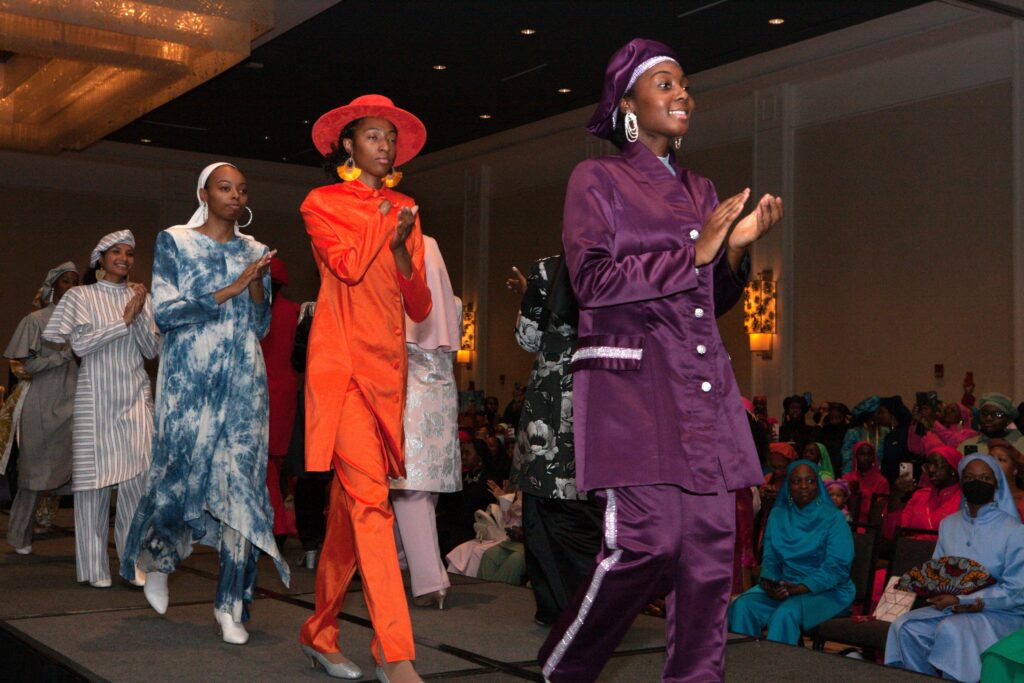 “This is the happiest I’ve ever been,” she expressed after the Sunday, September 18 program at Mosque Maryam, which closed out the retreat.

Attendees thanked Student National Captain Naeemah Muhammad and her staff for all their hard work and effort in putting together the retreat. Many members of the M.G.T. Vanguard told The Final Call that the work did not go unnoticed, and how much they appreciate Sister Naeemah Muhammad for her dedicated sacrifice.

Day in and out, members of the Vanguard expressed excitement about learning more about their role as the foremost group and experiencing an unforgettable weekend of events. They constantly expressed gratitude to Minister Farrakhan for his love and guidance.

Throughout four power-packed days, they participated in affirming workshops and activities, centered on the seven training units of the M.G.T., including sewing, rearing children, taking care of husbands, and how to keep house. Workshops also focused on understanding the divine value of women, martial arts, and guarding their chastity as a matter of national security. 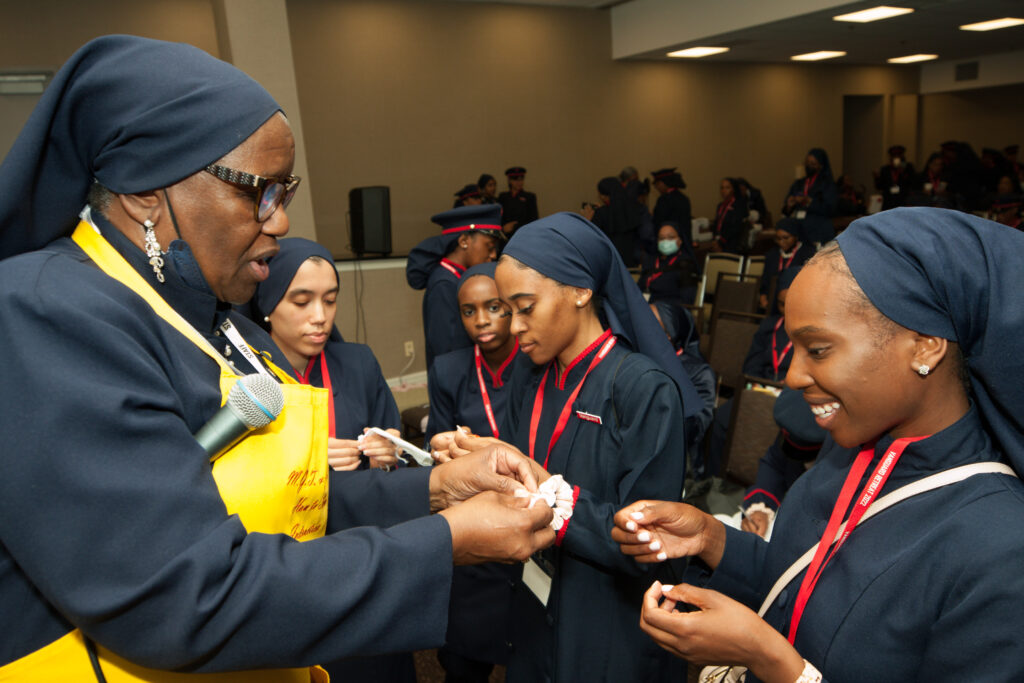 Before the fashion extravaganza on Friday, September 16, the women, dressed in blue Vanguard uniforms, filled the hotel ballroom and opened their ears and hearts to receive words from the Honorable Minister Louis Farrakhan. During the weekend, participants also received self-defense training from Student Assistant Supreme Captain and martial arts Grand Master Abdul Azziz Muhammad and his staff.

The finale was a riveting Sunday program at Mosque Maryam, where an array of M.G.T. Vanguard presented and spoke and Student Southern Regional M.G.T. and G.C.C. Captain Nusaybah Muhammad led a special salute to Student Minister Dr. Ava Muhammad. 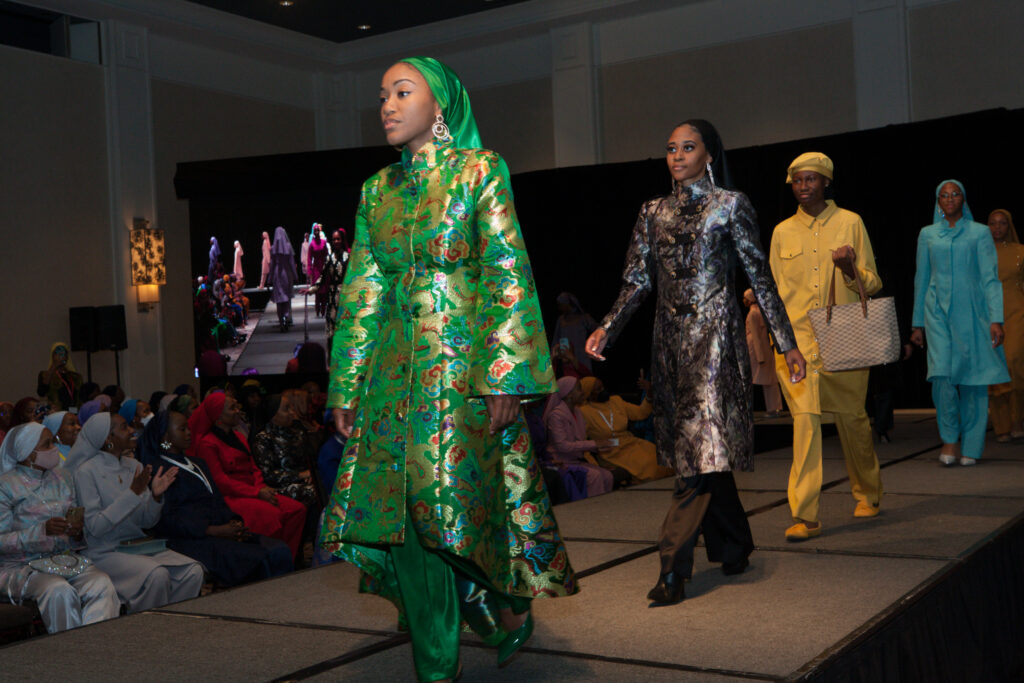 Kamilah Muhammad, 19, traveled from San Francisco to attend the retreat stated, “I grew up in the Nation of Islam and I became a Vanguard this year, the Sunday before Saviours’ Day. This is my first Vanguard retreat, and I love it. All of the sisters’ spirits are very kind, loving, and magnetic. I’m excited to go over my notes I took during Minister Farrakhan’s message, so that I can parse what he said, just reflect on his words.”

Sonalis Muhammad is a graduating senior at Benedict College. “I really enjoyed the retreat, it was like getting a glimpse of heaven, it felt like Saviours’ Day. I have not been around the Muslims since 2020, so being a college student majoring in social work and being able to be around my sisters again is rejuvenating and I really enjoyed my weekend,” she said.

Sister Treasure X from the Grand Rapids, Michigan, Study Group shared her impressions of the weekend. “My favorite part of the Vanguard Retreat 2022 has been just taking my time doing Godly things with my sisters, getting to know sisters and being inspired by all of the modest fashions and fun activities,” she said.

Aliyah Muhammad, 21, of Houston, Texas, was attending her first M.G.T. Vanguard retreat and said it was “phenomenal.” “It felt really good being among the sisterhood and being around unconditional love. 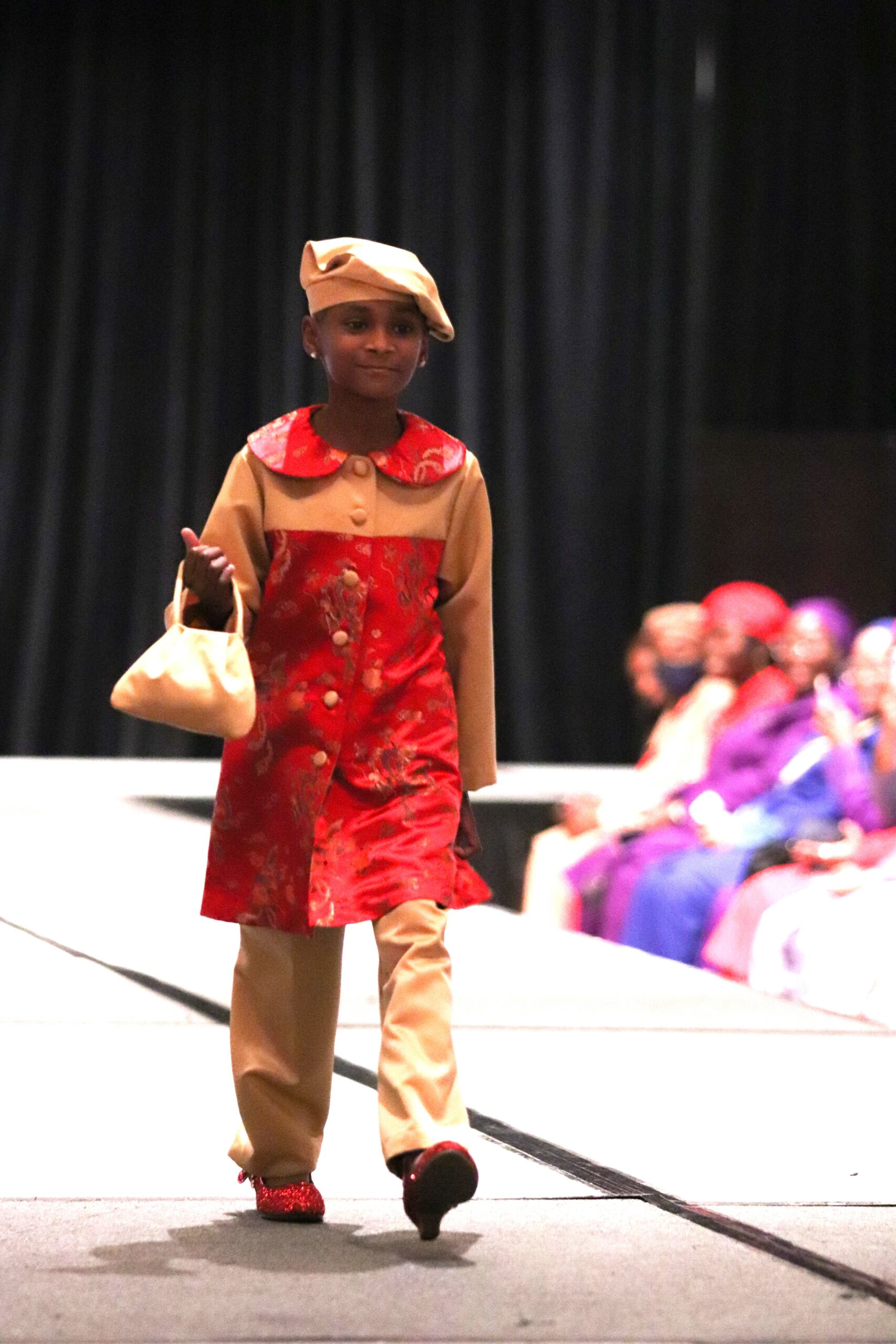 I was able to attend all the workshops and they were all based on spirituality, and your connection with Allah to develop your skill. I felt Allah’s presence every second that I was at the farm, it was pure serenity. The team-building activities allowed us to develop bonds with other sisters. I met so many sisters from around the Nation of Islam,” she said.

Student M.G.T. Captain Meshawn Muhammad of Mosque No. 46 in New Orleans said it felt good to accompany the young women of God, who were inspired to attend and fellowship with their sisters from around the country.

“I came in in the Vanguard Class, so for me it’s an honor that my daughters are now here as Vanguard and Jr. Vanguard. I’m happy that we have that next generation that’s going to take over our mosque and do the work for us,” she stated. 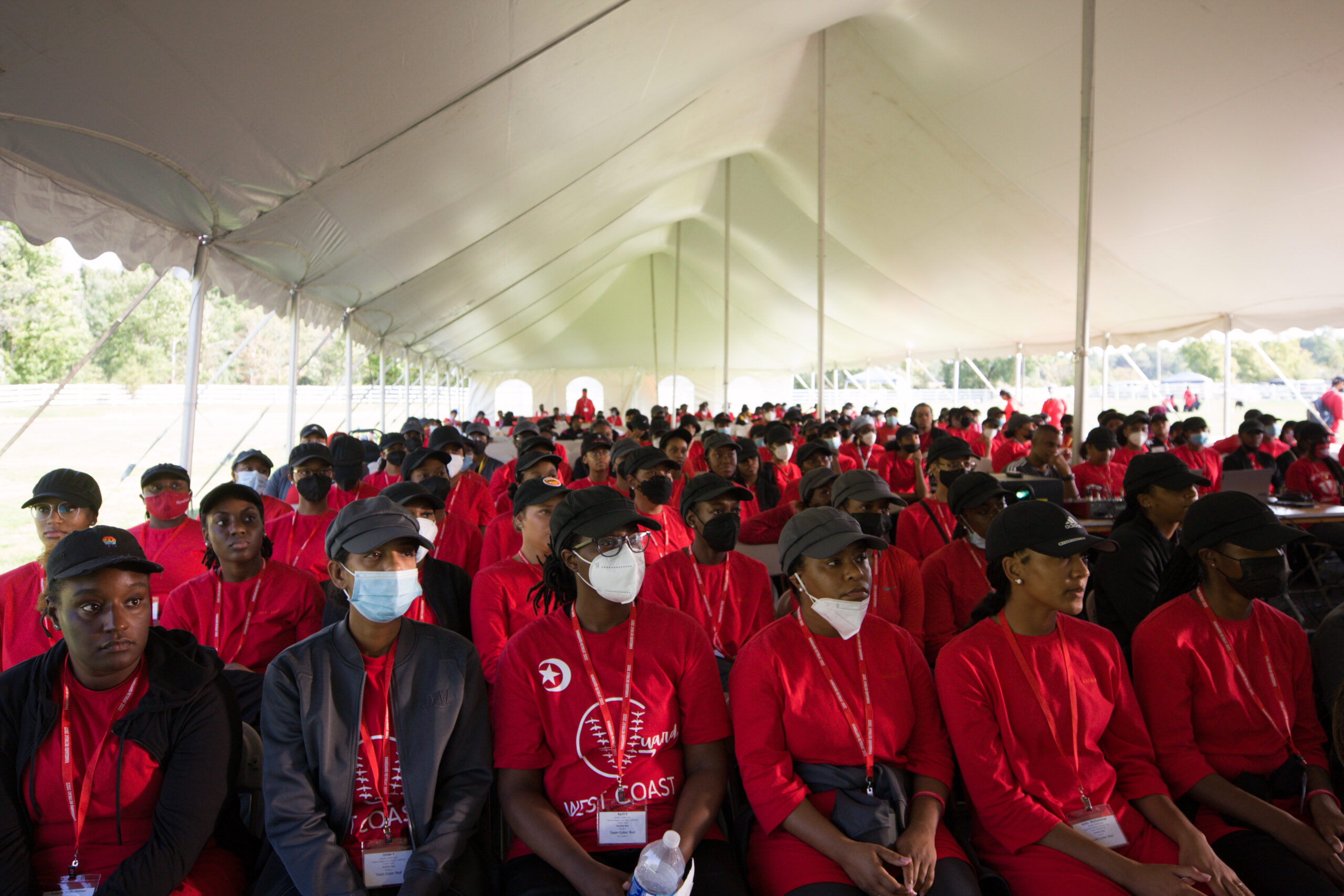 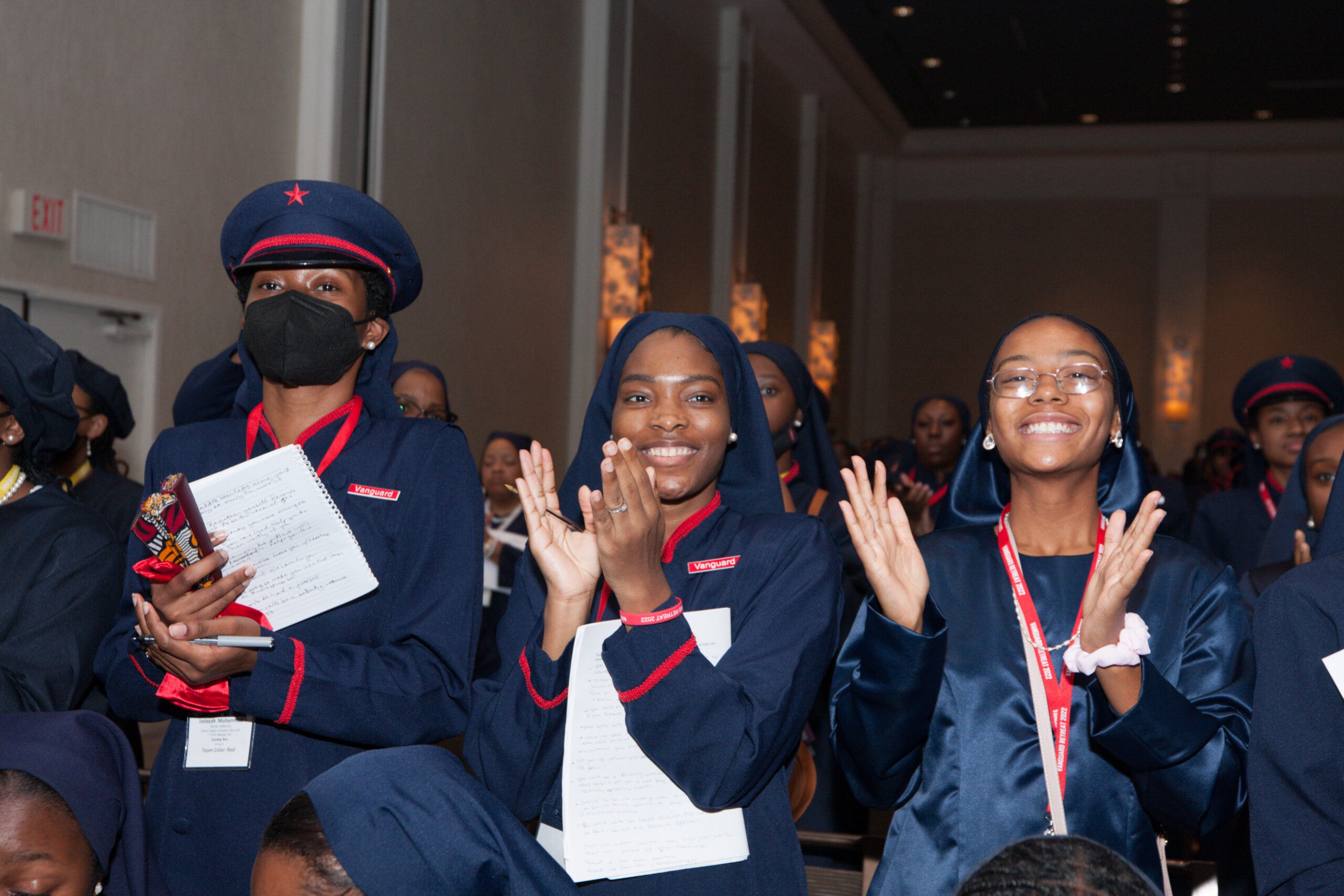