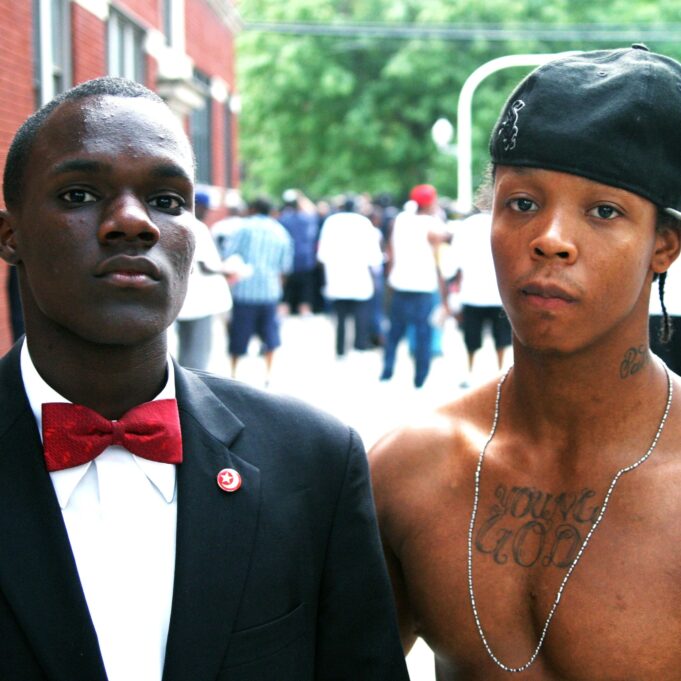 Black America is under attack spiritually, mentally, psychologically, and physically—but the Nation of Islam has the solution to Black survival. The Teachings of the Most Honorable Elijah Muhammad under the leadership and guidance of the Honorable Minister Louis Farrakhan contain the redemptive and resurrecting power Blacks need in these critical times as solutions for problems within our communities, said Student Minister Wesley Muhammad.

He spoke emphatically and meticulously, laying proof through contemporary examples of the assault on Black people when he spoke during a recent Sunday lecture at the Nation of Islam’s headquarters at Mosque Maryam in Chicago. His message, titled “When All Else Fails,” was also streamed live via internet. 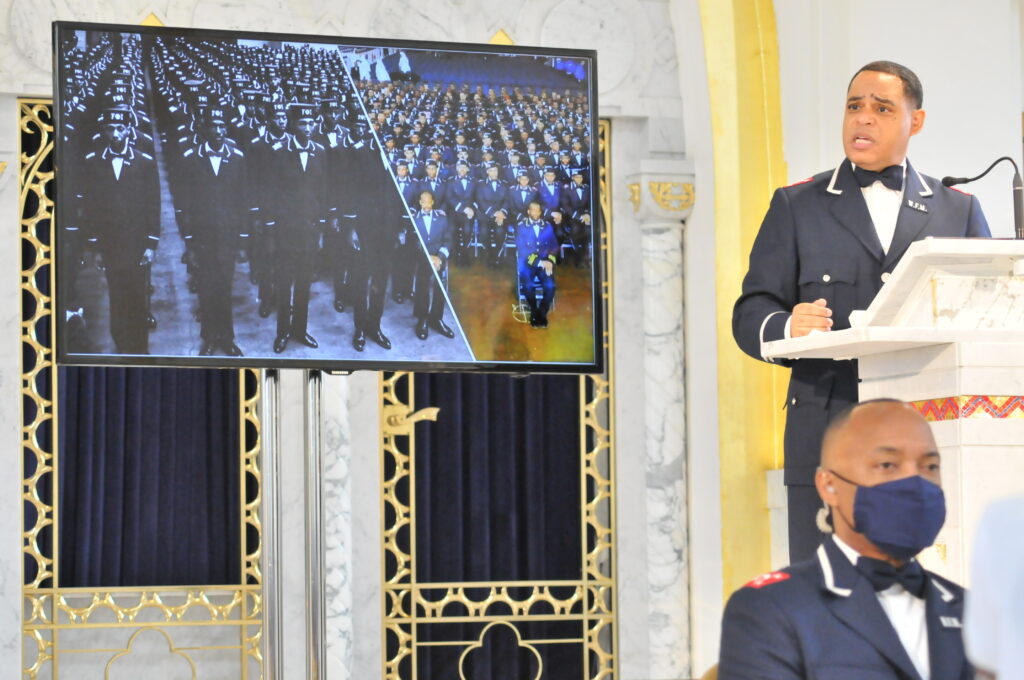 The Nation of Islam has been a strong and consistent voice against the U.S. government’s depopulation plot with its stance against the Covid-19 vaccine, Student Minister Muhammad—member of the Nation of Islam Executive Council, author, researcher and highly sought-after presenter—said as he began his presentation illustrated with slides for the in-person and online audience.

“The Honorable Brother Minister Farrakhan said, God wants you and I to try everything that we have in our head as a solution, different from what Allah has given as a solution,” he said. “The pestilence from heaven (Covid-19) has shown Black Americans that we can’t escape God and His plan by setting up alternatives. God said separation, but we wanted integration. We wanted civil and voting rights, but God said independence,” pointed out Min. Muhammad, who holds a Ph.D. in Islamic Studies.

The Nation of Islam should not be judged by how closely we follow others’ aims and objectives but rather by our own work, he pointed out.

Student Minister Muhammad illustrated the nefarious deeds committed by Caucasians against Black people while pointing out that these atrocities are not just history but are continuing today. When Black people begin to understand how the way of life of the Nation of Islam is the solution to overcoming these brazen attacks, it becomes clear what the Most Honorable Elijah Muhammad was taught by God to bring to the Black man and woman is the solution to our needs, he declared July 24.

“Most of the time when we use the word eugenic, we should be using dysgenics because White folks do not have a eugenic project for Black people, but they most definitely have us trapped in a dysgenics project,” he explained. “Eugenics is the science of selective breeding to produce good offspring through the elimination of poor hereditary traits. Dysgenics, on the other hand, involves the evolutionary weakening of a population through the production and reproduction of damaged offspring and the passing on of poor and injurious hereditary traits. In contrast, the aim of a eugenics project is the evolution of a healthy, strong, improved target race. A dysgenics project aims to produce a weak, impaired degenerated population.” 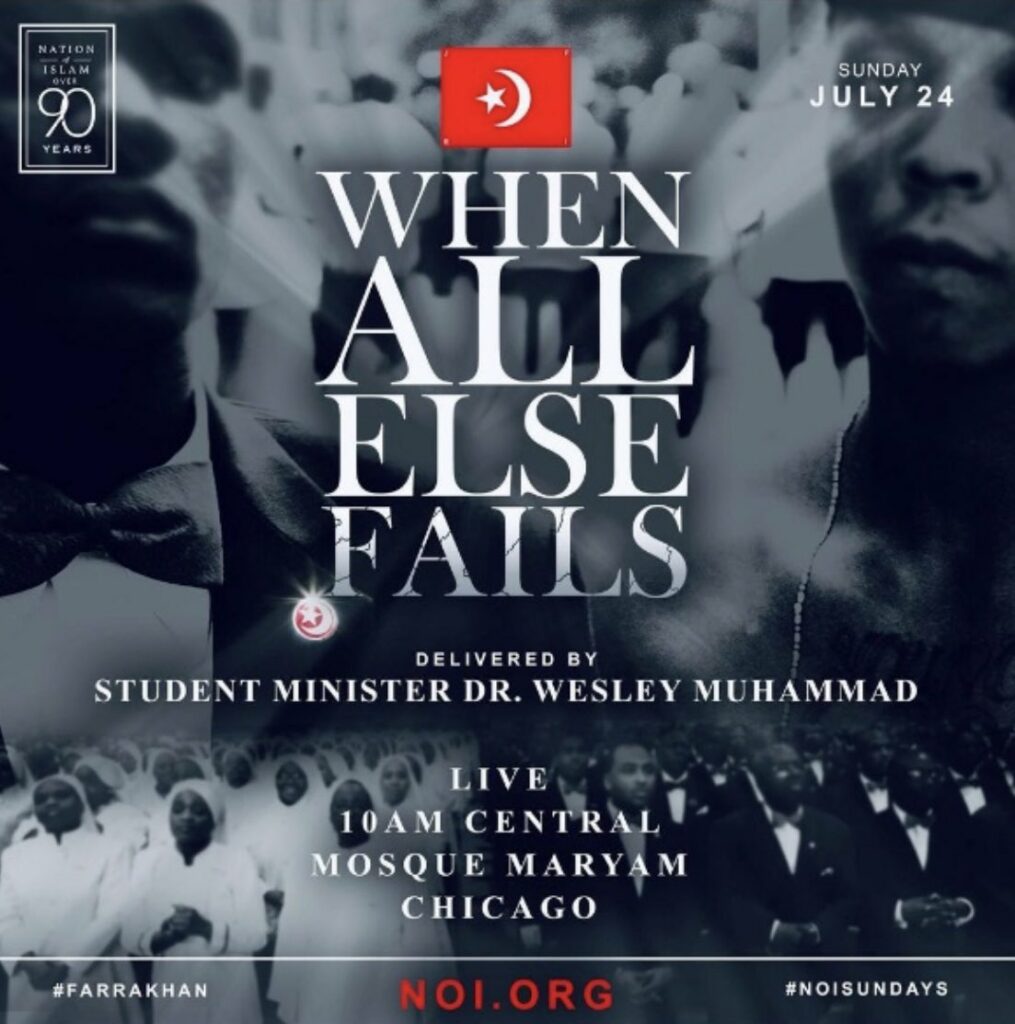 This country’s federal, state, and city governments have purposefully trapped Black people in a dysgenic program, he argued. “This project is responsible for so much of what constitutes Black life in America. He (the White man) is a scientist, and the Negro is his experiment,” Student Minister Muhammad said. There are active, deliberate policies and actions taken by federal, state and local governments that harm Black and Brown people, he continued.

Lead service water pipes are more prevalent in Illinois than elsewhere, he said, citing how Chicago has an above-average number of such water lines. Ninety-five percent of these poisonous pipes can be found within Black and Brown zip codes, he continued. Lead is toxic and has proven harmful if ingested or inhaled by humans.

“Lead is a dangerous metal that can slowly poison children over time. Children in the South and West (sides of) Chicago have higher lead exposure rates, leading to smaller brain volume as they grow up. These children may struggle with executive functions like decision-making skills or regulated moods,” he said.

Lead pollution can be linked to higher homicide rates. In counties with the highest levels of lead exposure, there was an increase in homicides. The Chicago zip codes, that have been identified as having high lead poisoning match up perfectly against those areas that suffer from increased violence, the student minister pointed out, referencing research and news articles on the subject.

The correlation between the legalization of marijuana and Chicago’s most violent years since 1994 cannot be ignored, he continued. The highly published researcher also shared how so-called legalized medical, recreational, or street pot contains artificial THC in excessive amounts, damaging the same prefrontal cortex of the brain as lead poisoning, consequently resulting in increased aggression, hostility, and violence. THC is the main psychoactive compound in marijuana and is what makes people feel “high.”

There is a deliberate effort through the legalization of marijuana via “weed” dispensaries that is contributing to many of the problems facing Black people and particularly youth, he argued. 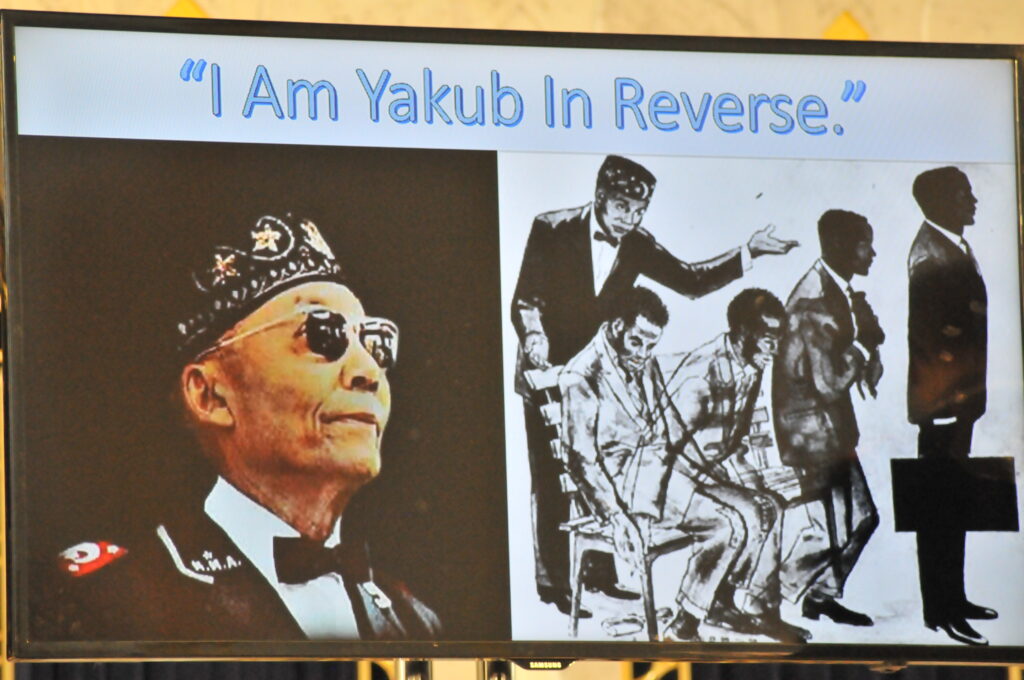 Slide shows illustration of the regenerative power of the teachings of The Most Honorable Elijah Muhammad.

The government has ensured that these born warriors will be neurologically and biochemically tailored to explode their rage, not on the 400-year-old enemy but on Black neighbors, wives, or girlfriends, said Student Minister Muhammad.

The Nation of Islam has been able to see into the root cause of Black peoples’ problems, and it has the solution, he asserted. The Nation of Islam is not simply a religion, it’s a prescribed lifestyle because Allah God gave it to us as means for healing from the ravages that have plagued our sojourn in America, he continued.

“What the Honorable Elijah Muhammad offers the Black man and women is spiritual, intellectual and moral repair, but also physical, physiological, biochemical and neurological repair.

“If Chicago adopted just aspects of our lifestyle, communal healing would be effective,” he added. He pointed to “How To Eat To Live” by the Most Honorable Elijah Muhammad to illustrate this point.

“For example, our unique dietary lifestyle can repair damage caused by the lead poisoning caused by the city of Chicago. Lead poisoning has been associated with the growth of several types of cancer, which are epidemic in Black America today, as well as neurodegenerative diseases, such as Alzheimer’s Disease, which has also been described as Black America’s silent epidemic.” 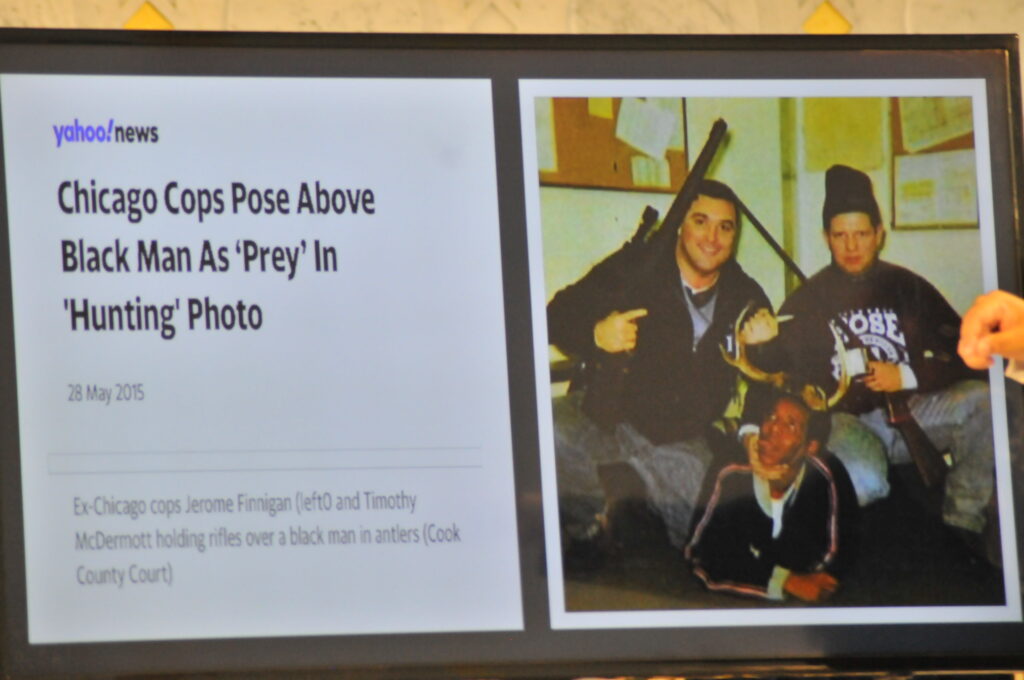 Dr. Wesley Muhammad shared that the Nation of Islam’s dietary lifestyle is based around a unique fasting protocol, which includes fasting for three days every month or the “National Fast.”

“Our fasting protocol can trigger a host of physiological and neurological processes that repair or regenerate whole systems at the cellular level. Our three-day National Fast, for example, is now known to stimulate stem cells in our immune system, allowing us to replace an old deficiency with one new stronger than before! A similar process is triggered in the brain, stimulating neurogenesis or the growth of neurons, brain cells, and removing damaged neurons or brain cells,” he noted.

“Every other system, every other religion, every other agenda, whatever limited good they may do, they are still incapable of repairing what Satan has broken. Only Allah has the power to repair God’s people. There is no one else who can do that but God. And God gave us Islam as a religion,” he pointed out.

The power of truth

The power of hip hop culture and its potential for community impact cannot be understated, Dr. Wesley Muhammad noted during his message. No one has more influence among Black people than a rap artist which makes them critical players in shaping thinking and behavior today, he stated.

“The black stallion hip hop can lead Black people towards redemption, or it can lead us toward degradation and doom,” he observed. “If the culture wants to get back on track, it should follow our lead, like it did in the beginning. Hip hop had its golden years when it was deferential to Islam.” 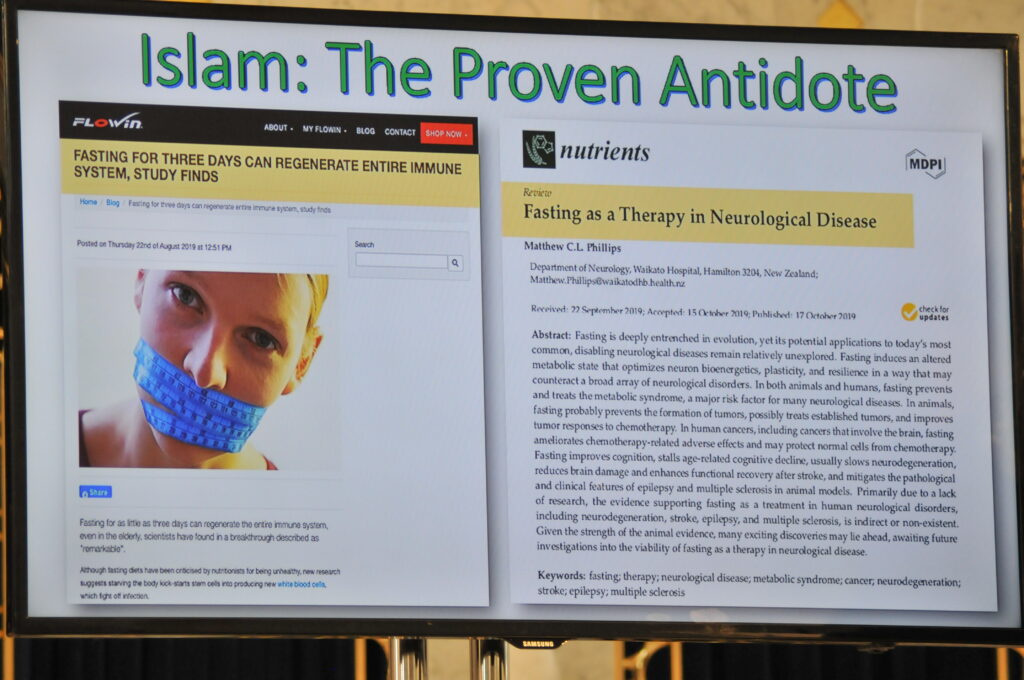 Dr. Wesley shared how the teaching of The Most Honorable Elijah Muhammad can prevent, even regenerate, damage done to the human body.

Islam provides a way to restore divine femininity and masculinity in Black people as the Western world is moving toward an ultimate gender-neutral goal, he explained.

The key to happiness is incorporating God into your life and having a structure for truthfulness, said Dr. Muhammad. “The power of the truth that we speak must be supported by a structure of equal power.”

He told listeners that each one of us must live our best life. “Your best selves are living gods, and by being living gods, you have much more than a bank. You have mastery over yourself, which gives you power over Satan and knowledge of the environment around you.”

“Islam comes when all else fails, and everything this world has offered has failed. Black man and woman, let us stop running from our divine destiny. Join the Nation of Islam!” he concluded.

To view this message in its entirety, visit media.noi.org.
Posted by Muhammad's Study Group of Grand Rapids, Michigan at 3:14 PM