THE CHASTISEMENT OF ALLAH (GOD) HAS BEGUN
By Shawntell Muhammad, Contributing Writer
- April 12, 2022 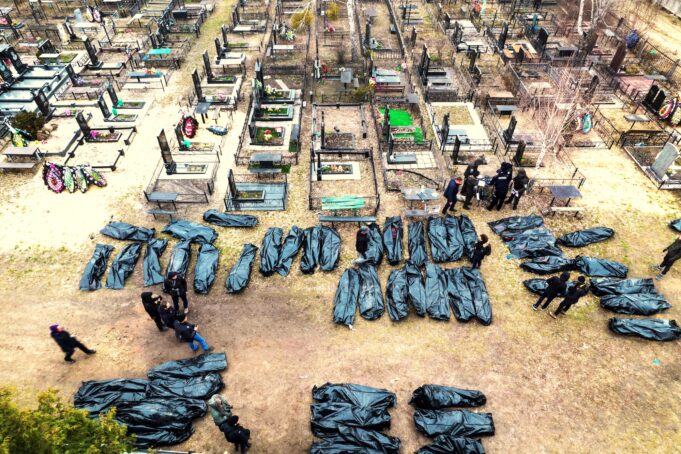 Parts of the U.S. are dealing with the aftermath of the latest rounds of severe weather. During the week of April 4, dozens of tornadoes were reported from Texas to the Southeast, including at least 38 in Mississippi, Alabama, Georgia, and South Carolina, according to the National Weather Service.

Separate systems moving East produced thunderstorms, rain and hail. About 22 million people from southeastern Louisiana to the South Carolina coast were under risk for severe storms.

According to the Storm Prediction Center, tornadoes, hail up to two inches and wind gusts up to 70 miles per hour were expected to hit portions of eastern and southeastern Georgia and western South Carolina, including the cities of Charleston and Columbia, South Carolina; and Savannah, Georgia.

Accuweather Meteorologist Brandon Buckingham stated on accuweather.com, “Numerous disruptions to travel and shipping efforts are likely with the potential for power outages as a result of rain, thunderstorms, wind and snow from the unfolding and strengthening storm next week over the middle of the nation.” 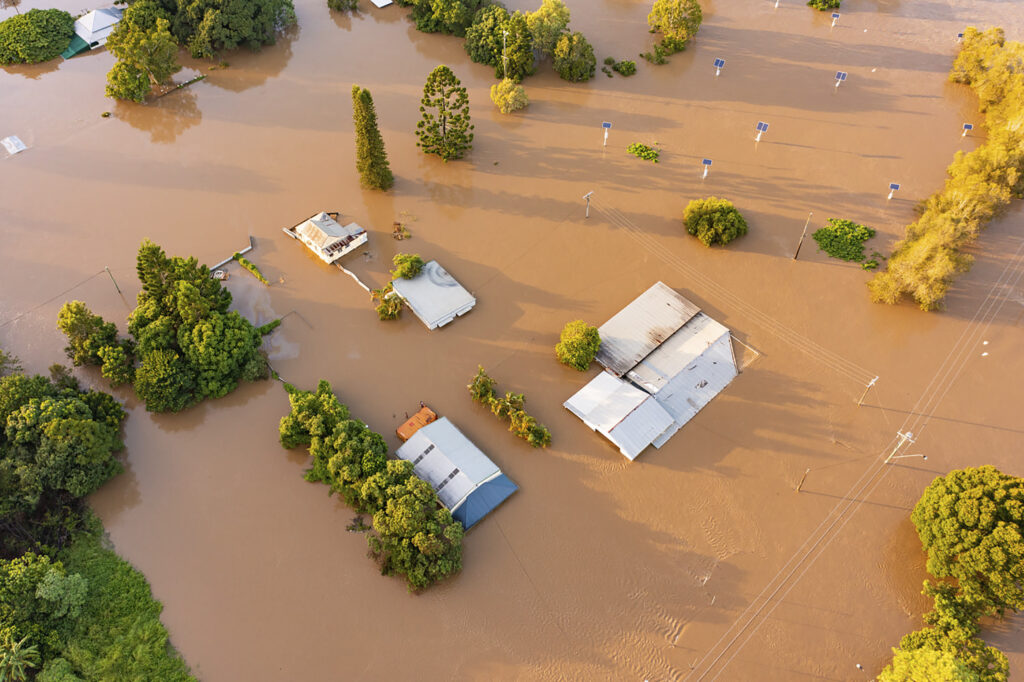 In this photo provided by the Fraser Coast Regional Council, water floods streets and houses in Maryborough, Australia, Monday, Feb. 28, 2022. Heavy rain is bringing record flooding to some east coast areas while the flooding in Brisbane, a population of 2.6 million, and its surrounds is the worst since 2011 when the city was inundated by what was described as a once-in-a-century event. (Queensland Fire and Emergency Services via AP)

Shortly after the Nation of Islam commemorated its annual Saviours’ Day celebration, with a special Feb. 27 message from the Honorable Minister Louis Farrakhan, entitled, “The Swan Song,” the United States, as well as other countries, experienced unusual weather events.

Opening the Islamic Holy Month of Ramadan, the Minister addressed listeners via phone on the Ramadan Prayer Line on April 2 with these words, in part:

“Since Saviours’ Day or ‘The Swan Song,’ the natural strength of God’s power over nature is manifesting more and more. This is such a serious time for us as Believers, but it is a serious time for every human being that walk upon the earth that belongs to Allah.”

He continued, “Allah is warning us and telling us that we must do that which is necessary to cast off the burden of sin. Our iniquitous behavior all over the earth has caused the anger of God but also we are living in the time of the ending of a world of wickedness. This is the time of the Judgment of God. This is the time that the Honorable Elijah Muhammad has pointed out to us as the Days of Allah,” he said referencing his Teacher and Eternal Leader of the Nation of Islam. 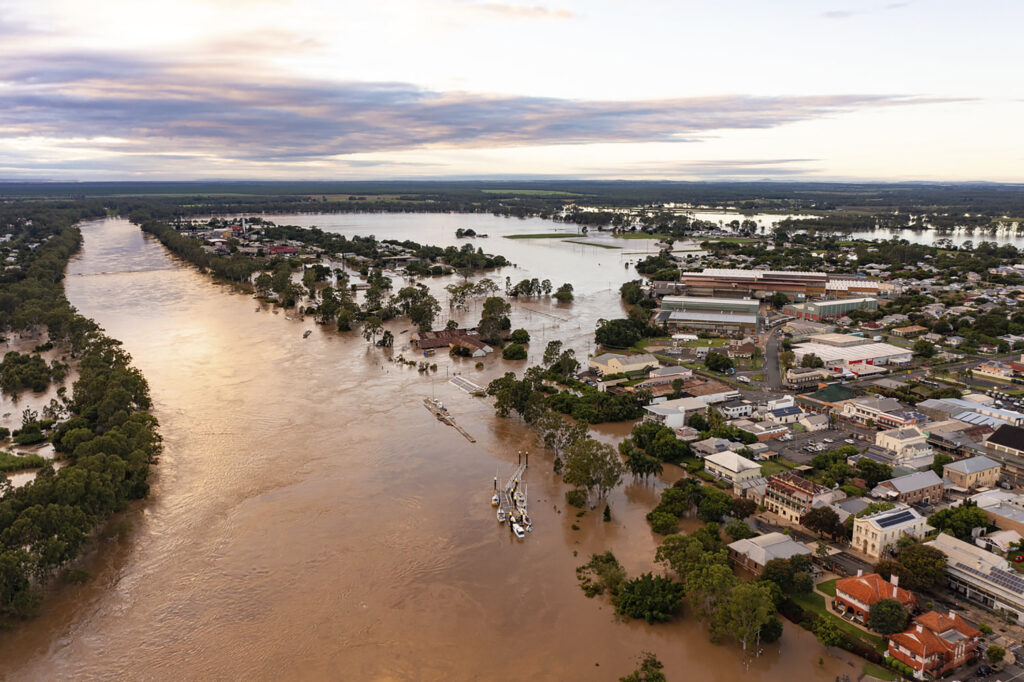 In this photo provided by the Fraser Coast Regional Council, water floods streets and buildings in Maryborough, Australia, Monday, Feb. 28, 2022. Heavy rain is bringing record flooding to some east coast areas while the flooding in Brisbane, a population of 2.6 million, and its surrounds is the worst since 2011 when the city was inundated by what was described as a once-in-a-century event. (Queensland Fire and Emergency Services via AP)

Ocala, Florida, located in Marion County, was hit with an EF-1 tornado at a rate of 110 mph, on March 12. The tornado caused real estate damage, personal property loss and with the debris removal, left a total of $15.6 million in damages.

Birmingham, Alabama, experienced heavy rain and flash flooding. The area got up to five inches of rain, washing out roads, leaving motorists stranded.

The website climate.gov reported, “Short term drought recently developed in a region stretching from North Carolina southward through parts of Florida. Dry conditions will bring an elevated risk of wildfires across the Southwest and southern Plains and north to the Central Plains, especially when high winds are present. Drought conditions in the Southwest are unlikely to improve until the late summer monsoon rainfall begins.”

In the month of March, many areas of the U.S. and globally experienced severe weather events. The state of California endured a spring heat wave, while still undergoing a severe drought which saw temperatures such as 89 degrees in Santa Rosa, breaking a 1926 record of 86 degrees. The city of Camarillo hit 90 degrees, breaking a 1926 and 2008 record of 88 degrees. Burbank tied an 86-degree record set in 2008, while downtown Sacramento tied the 1915 record of 82 degrees. 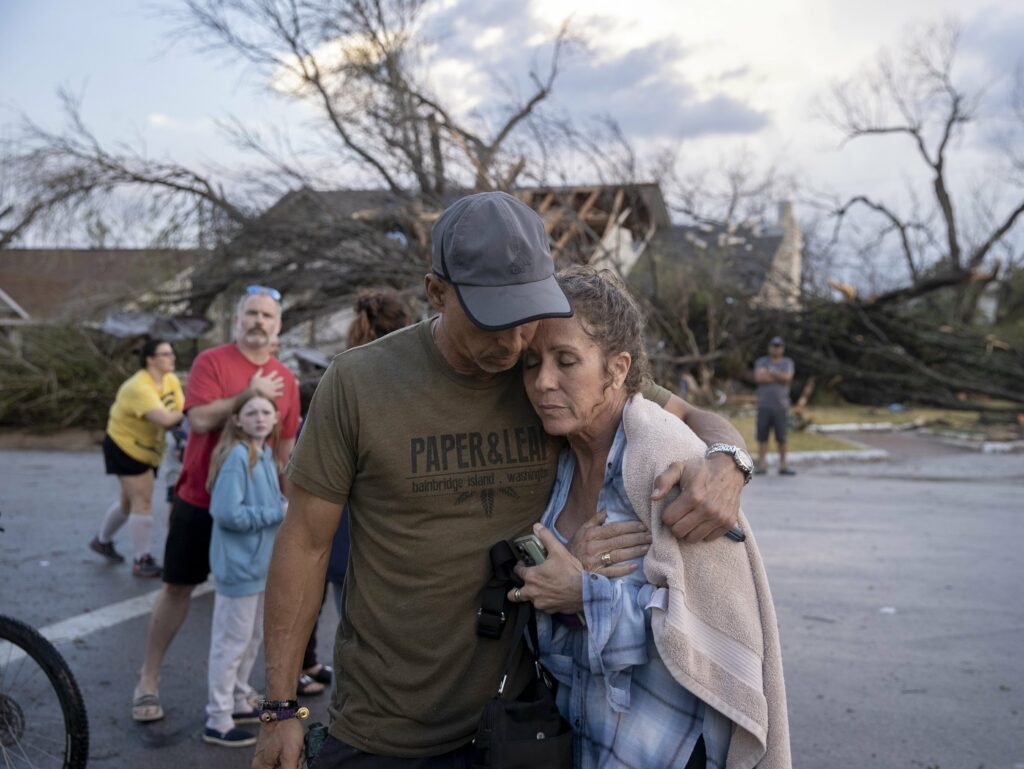 Michael Talamantez comforts his girlfriend Derry Schroer after Talamantez’ house on Stratford Drive in Round Rock, Texas was destroyed by a severe storm, reported as a tornado, while they were inside on Monday March 21, 2022. “I thought I was going to die,” he said. (Jay Janner/Austin American-Statesman via AP)

“We see that Allah (God) is active, Allah and His Christ are active bringing storms and tornadoes across the country, particularly in the South. The natural weather occurrences are increasing. Northwest Texas has been experiencing drought-like conditions with increased winds, which can cause fires to spread rapidly.

We’ve been on an outdoor burning ban in parts of Texas because of this,” stated Student Minister Dr. Haleem Muhammad, Southwest Regional Representative of the Nation of Islam.

Other parts of the world are also experiencing severe and unprecedented weather.

The metropolitan area of Petropolis, located in Rio de Janeiro, Brazil, was struck with heavy rainfall on March 20, dropping 16 inches of rain in just 10 hours, with eight inches of that total falling within a four-hour time period. The torrential rainfall caused massive landslides. The city endured 100 landslides and major flooding, buildings were damaged and destroyed. 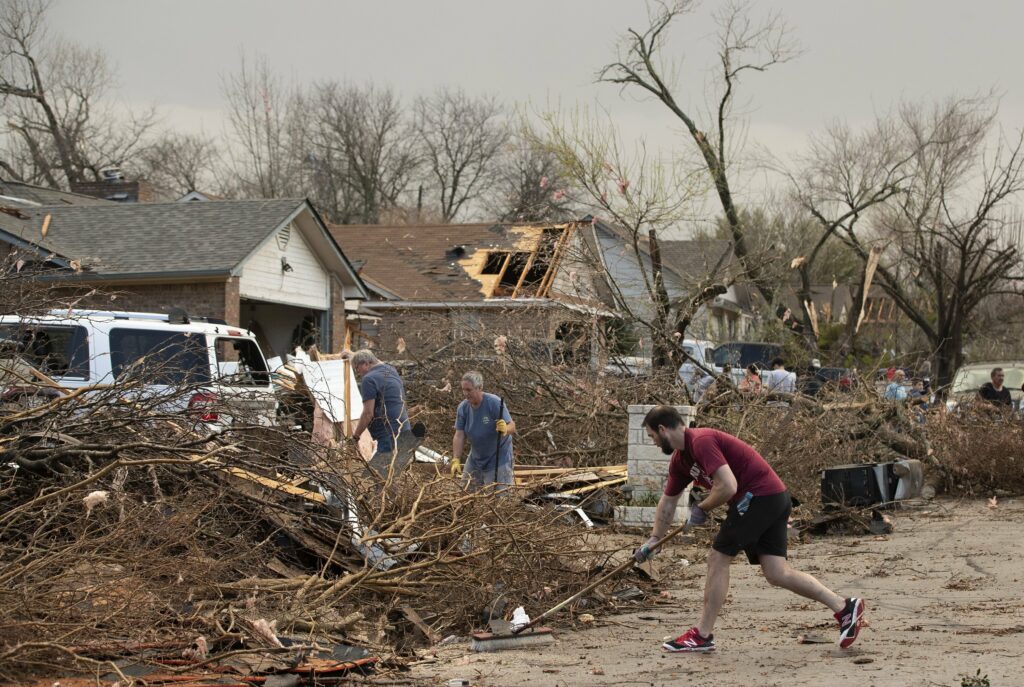 Jarrod Schneider, who lives on Oxford Drive in Round Rock, Texas, helps his neighbors clean up after a tornado heavily damaged several homes on the street on Monday ,March 21, 2022. (Jay Janner/Austin American-Statesman via AP)

“Sydney has received 1,227 millimeters (48 inches) of rain so far this year, more than its average annual rainfall of 1,213 millimeters. Over the next 24 hours, many coastal towns could get up to 180 millimeters, the Bureau of Meteorology said,” reported cnn.com.

“The people cry about death and destruction playing havoc over America, but they never cry about the evil that they are committing, which is the cause of this destruction coming into her borders bringing floods, rain, ice, hail and earthquakes daily and nightly somewhere on the surface of the land of America,” wrote the Hon. Elijah Muhammad in his critically important book, “The Fall of America.”

Beginning March 29, nearly 30 tornadoes formed in the Florida Panhandle, wreaking havoc across seven states within the South and Midwest. The National Weather Service reported one tornado registering an EF-3 with winds at 145 mph, tore through Springdale, Arkansas, injuring seven people and caused heavy damage to an elementary school.

ABC News’ site, abcnews.go.com, reported, “Besides tornadoes, the severe weather front came with damaging winds that ripped roofs on homes, barns, and businesses and uprooted trees. In Louisiana, powerful winds and low visibility due to blowing debris was blamed for a three car pile up on a highway near Iota that caused several minor injuries.” 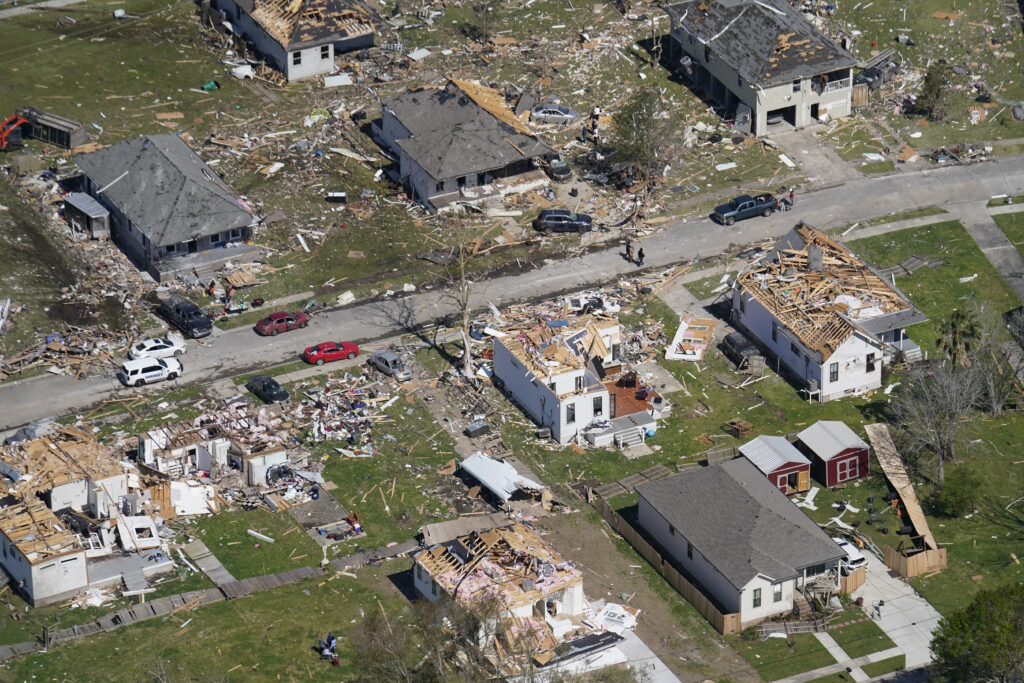 Homes are damaged after a tornado swept through, Wednesday, March 23, 2022, in Arabi, La. A tornado flipped cars, ripped off rooftops and deposited a house in the middle of a street in the New Orleans area, part of a storm front that caused damage in places as it blew from Texas to South Carolina. (AP Photo/Gerald Herbert)

Power outages from severe weather have doubled over the past two decades across the U.S., as a warming climate stirs more destructive storms that cripple broad segments of the nation’s aging electrical grid, according to an Associated Press analysis of government data.

The United States Department of Energy data shows, “Forty states are experiencing longer outages, and the problem is most acute in regions seeing more extreme weather. The blackouts can be harmful and even deadly for the elderly and disabled and other vulnerable communities.”

The Associated Press analysis found that the number of outages tied to severe weather were more than 100 annually on average over the past five years; and in California alone, power losses have affected tens of thousands of people who rely on electricity for medical needs. 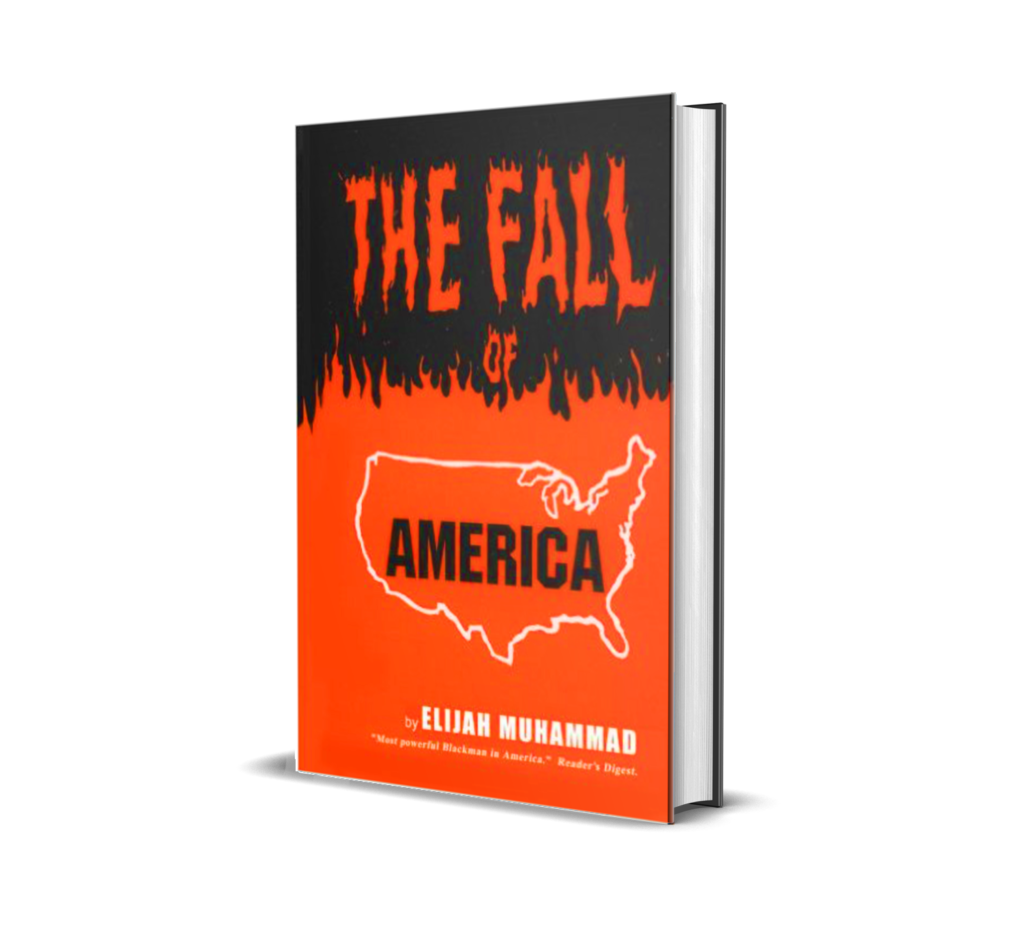 “The four (4) Great Judgments that Allah (God) promises to destroy America with are now coming upon her … hail, snow, drought, earthquake. Allah (God) has reserved His treasures of snow and ice to be used against the wicked country America in the day of battle and war. These are some of Allah’s (God’s) weapons, the storms that we see going on,” he warned in “The Fall of America.”

Shawntell Muhammad can be contacted at organicallybalanced@gmail.com. Final Call staff contributed to this report.
Posted by Muhammad's Study Group of Grand Rapids, Michigan at 11:29 PM