The Obama Presidential Library brings excitement, but concern Blacks will be pushed out 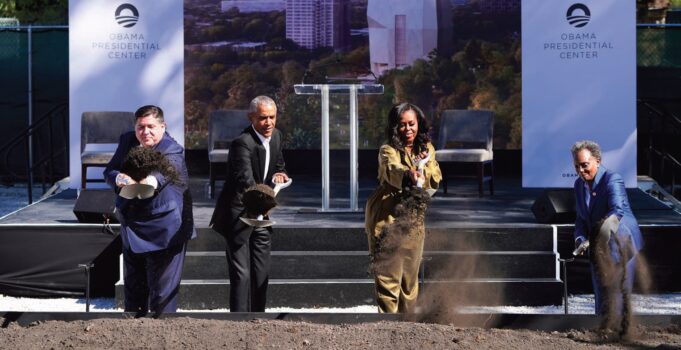 CHICAGO—Former President Barack Obama and former first lady Michelle Obama are promising to bring an “enriching” experience to the South Side of Chicago with the establishment of the Obama Presidential Center, estimated to be completed in 2025.

The $830 million, 19.3-acre, 235-feet tall project will encompass a library, museum, park and activity center, walkway, garden and children’s park. It will be located in Jackson Park, on former public land, and near the Black neighborhoods of Woodlawn, Kenwood, South Shore, more racially mixed and affluent Hyde Park and the sprawling University of Chicago. The Obama Foundation, created by the former president and others, is the force behind the library project. The foundation has said the center will create jobs, increase economic opportunity, “unlock the potential that has always existed on the South Side” and “celebrate our first African American president and First Lady.” 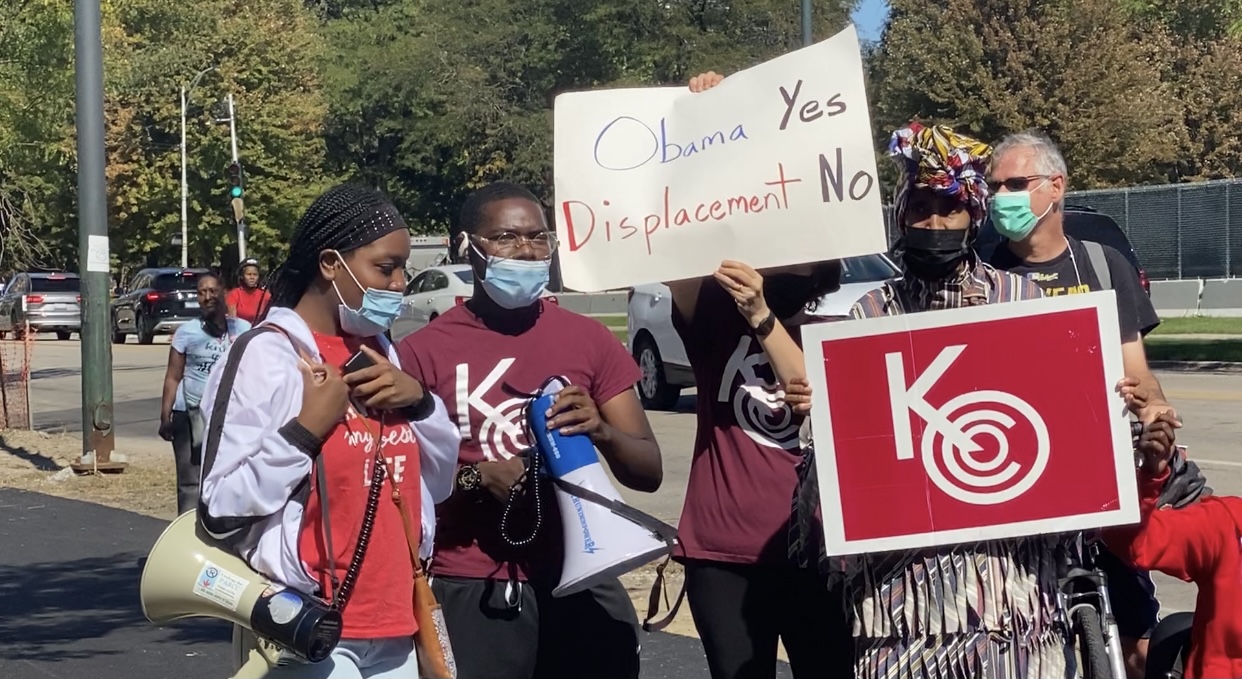 During a groundbreaking event in late September, Chicago Mayor Lori Lightfoot and Illinois Governor J.B. Pritzker showed their support by joining the former president and first lady digging symbolic shovels into dirt as part of the ceremony.

But for some South Side residents, a presidential center sounds nice but they wonder “where will I live and sleep now?”
Advertisement

The Obama Community Benefits Agreement Coalition, which includes the Kenwood Oakland Community Organization (KOCO), organizing group STOP Chicago, UChicago For CBA, the West Side Health Authority, Chicago Lawyers Committee for Civil Rights, the Poor Peoples’ Campaign, and Black Youth Project 100, are concerned that a presidential center might result in disastrous replacement and displacement of residents in the predominantly Black area. The coalition has been fighting against gentrification and for other guarantees residents will be able to stay and enjoy any positive changes in their neighborhoods. They have been fighting for five years. 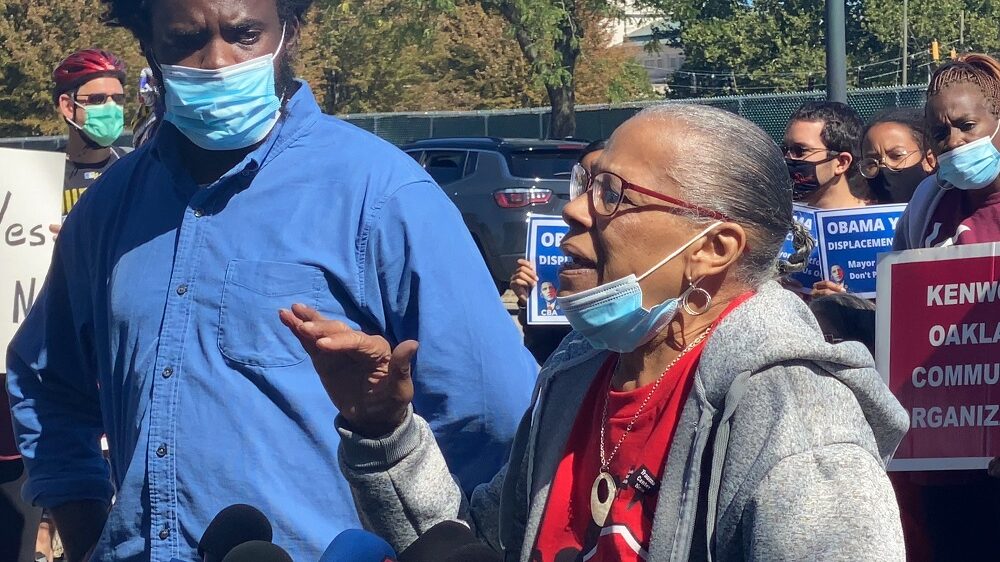 During a press conference shortly before the Sept. 28 groundbreaking ceremony, KOCO and STOP Chicago joined residents in demanding affordable housing protections for Blacks who don’t want to be pushed, priced or driven out. Mayor Lightfoot, they said, needs to follow through on promises to protect affordable housing in the Woodlawn neighborhood. Others said South Shore, within walking distance, is even worse off because it has no affordable housing commitments from anyone.

“We say, ‘Yes to Obama; No to displacement,’ ” said Shannon Bennett, executive director of KOCO. There is great love for the former president, but there must be something done about making sure people do not lose their residency over higher taxes and rent raises, he said. 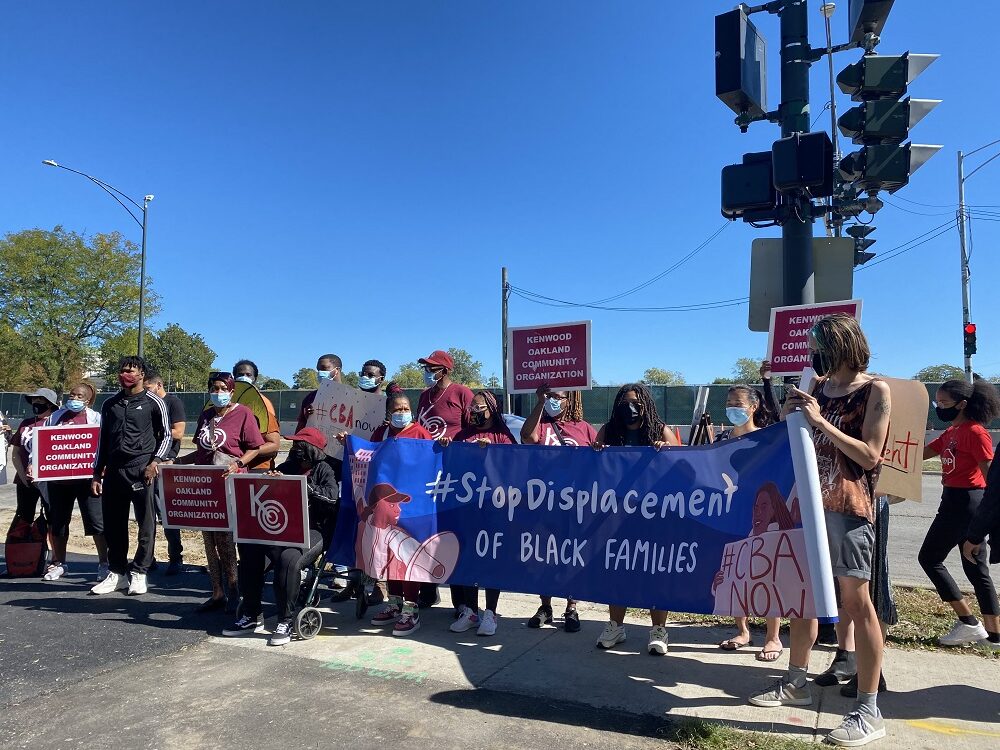 Michele Williams, 79, lives near South Stony Island Avenue, which runs along one side of the Obama Center construction site. She is tired of seeing Blacks pushed out with no place to go as the South Side becomes more desirable and as developers come in. She foresees the same thing happening with the construction of the Obama Center, unless something changes. She believes the building she lives in will be demolished and rebuilt for higher paying tenants or owners. “Why isn’t the mayor with us? I appreciate what he (Mr. Obama) did, but he has to remember where he came from. He has to do it!” she said.

“They already out asking people to sell their property. That’s not right!” she continued. 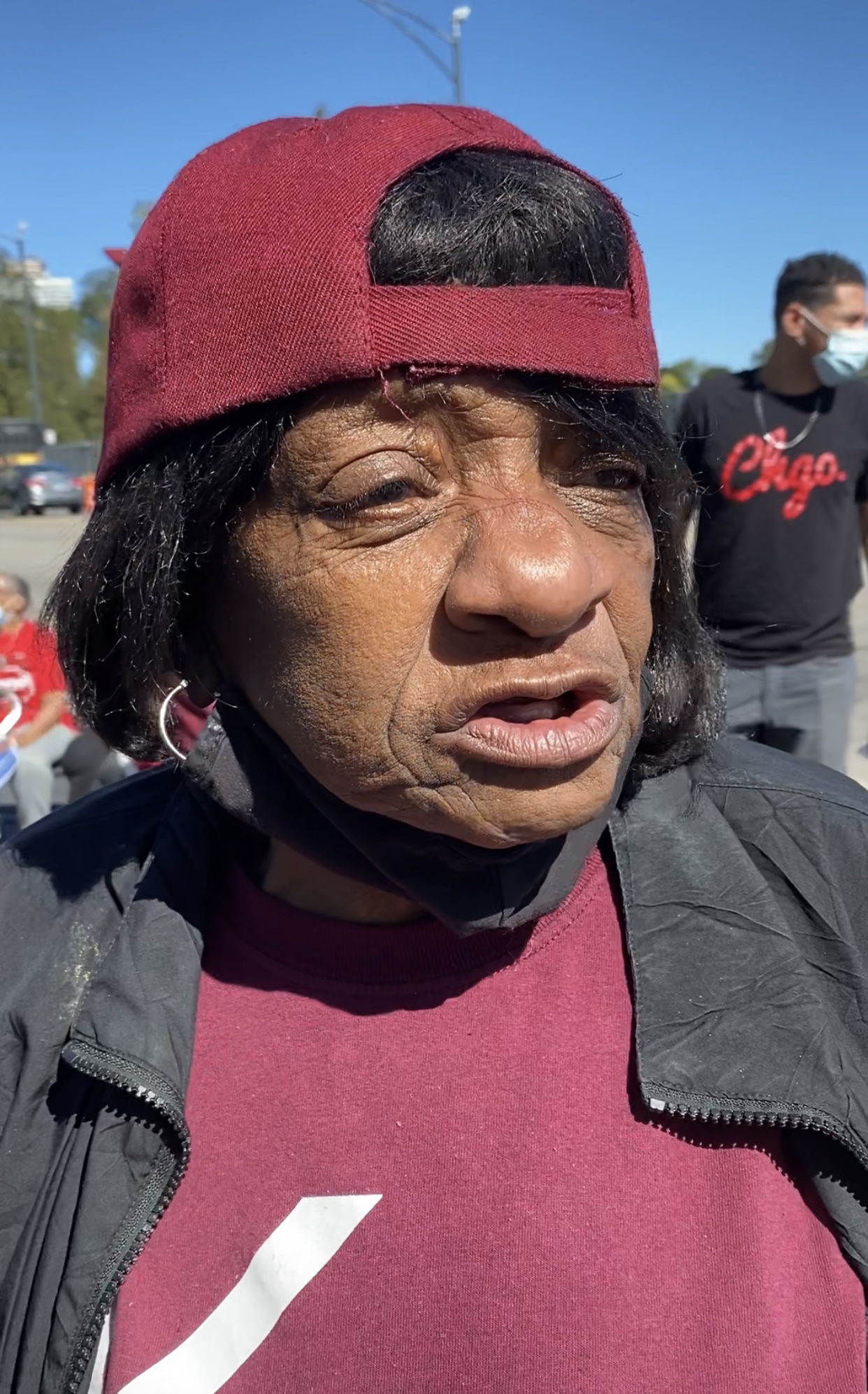 Blacks in the city already have displacement, eviction and housing problems, documented in a 2017 study by the Urban Displacement Project. The group found:

More than 200,000 low-income Chicago households (18 percent of all low-income households) live in low-income neighborhoods at risk of, or already experiencing, gentrification and/or displacement, especially in the southern and western parts of the city.

22 percent of lower-income neighborhoods in Chicago were at risk of gentrification in 2017, and 16 percent were undergoing displacement of low-income households without gentrification.

KOCO member Parrish Brown told The Final Call he was concerned that the groundbreaking ceremony was only limited to officials and some media outlets. “The fact that there’s a ribbon cutting event and no community members present, usually when I see a ribbon cutting, it’s a whole bunch of people who are being in the plans and talking about how this development is going to support us,” he said.

Savannah Brown of STOP Chicago emphasized work Mayor Lightfoot could do to help the organizations and communities threatened by displacement.

“If we’re not in the conversations and the plan is already developed, and then you’re cutting a groundbreaking and we see all these signs and it’s a few people? What does that tell us in our own community?”

“There’s a misstep by the mayor and the city. They haven’t yet given us what we want. Obviously, we need her to give us the most affordable units as possible,” said the community organizer. Her group supports increased affordable housing along certain major streets to expand and strengthen protections for places where people live and want to live.

The Obama Foundation and mayor’s press office did not respond to The Final Call’s request for comment. 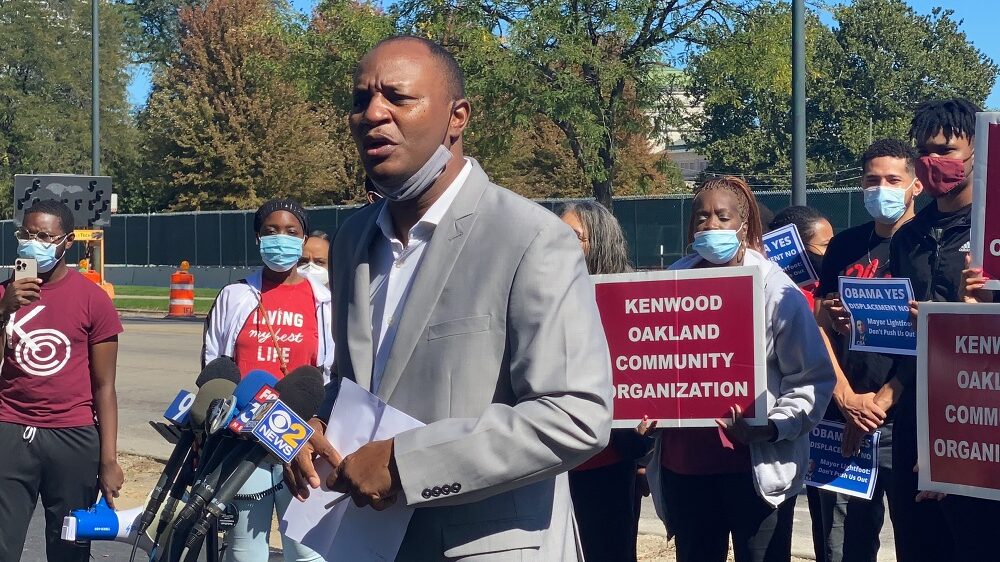 According to the Lawyers’ Committee for Better Housing, Blacks are four times more likely to be evicted from their homes than their White counterparts. According to the University of Chicago Press Journals and National Library of Medicine, low-income or “urban” tenants are typically limited to substandard housing in high-crime, poor neighborhoods.

With these statistics in mind and the long history of displacement within Black communities, some believe that the presidential center is just another part of the problem.

Maze Jackson, host of the online Maze Jackson Show, said it is not a matter of if but when the presidential center will cause Blacks to lose their residency especially as you approach the South Shore neighborhood, a few blocks south of the center.

“I don’t think that’s going to be a question,” said Maze Jackson. “I think that it provides a cover to continue to push people out of that area. … It used to be Roosevelt, then 22nd, now you’re seeing Bronzeville being taken over. When you think of UC (University of Chicago), connecting the dots between Washington Park and the Obama Center on 63rd, where’s the Black people? I would expect that you’re going to see very nice townhomes, single homes.” 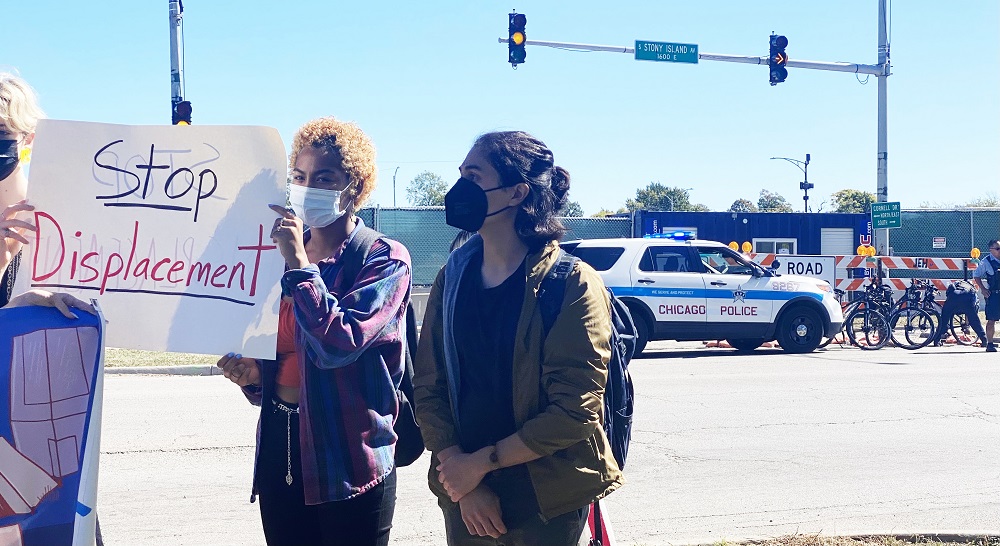 He noted that the Honorable Minister Louis Farrakhan of the Nation of Islam who teaches the program of the Most Honorable Elijah Muhammad of doing for self is the solution. He said it starts with residents owning where they live and not bending to pressure to sell.

“Realistically, we’ve got to encourage people not to sell, to stay in their homes, to appreciate the value of their homes,” he continued. “We have to circle the wagons and stop looking on the outside,” he continued. “The Minister’s answer of self-reliance is really the answer to all of our issues.”

“When they say ‘affordable housing,’ affordable for who? It’s a diabolical plan against us; I agree with the majority of what the Honorable Minister Louis Farrakhan says. They know a lot of our people are blind,” he continued.

Mr. Israel’s coalition helps to alleviate homelessness and poverty by providing educational opportunities and social services. He also argued an educational program on owning and maintaining property is desperately needed in the Black community, especially Chicago.

(This is the first in an occasional series of articles about the Obama Presidential Center and neighboring Black communities.)
Posted by Muhammad's Study Group of Grand Rapids, Michigan at 6:35 PM