Is U.S. marching steadily to war with Iran? 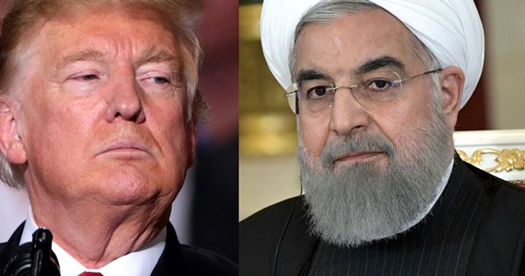 
WASHINGTON—President Donald J. Trump seems to want war with Iran. Secretary of State Mike Pompeo is beating the drum for war with Iran. National Security Adviser John Bolton is itching for war with Iran. Together they are orchestrating an all-too-familiar scenario to justify the use of U.S. military force against the Islamic Republic.

In 1846 U.S. forces falsely claimed they were attacked by Mexican forces inside U.S. territory. In retaliation the U.S. launched the Mexican-American War, seizing land from New Mexico to California, to Colorado, even to Utah.

Have we forgotten the suspicious sinking of the USS Maine, the Navy ship which went down in the Havana Harbor in 1898, dragging the U.S. into the Spanish-American War?

In 1962 a Pentagon plan called "Operation Northwoods" was hatched for the Central Intelligence Agency (CIA) to commit acts of terrorism against U.S. civilians to be blamed on Cuba, in order to justify an invasion of that country. In 1964 the White House committed “material misrepresentations” of the truth of what was known as the “Gulf of Tonkin Incident” in order to goad Congress into authorizing war with Vietnam. And of course the convincing dramatizations of “Yellow Cake Uranium” and non-existent “weapons of mass destruction” were used to justify the U.S. invasion of Iraq in 2003.

The Trump administration is now stoking fear of a potential conflict with Iran. The president withdrew from the landmark Iran nuclear deal—the Joint Comprehensive Plan of Action—in May 2018. More recently, National Security Adviser John Bolton asked the Pentagon to provide the White House with military options to strike Iran.

In the latest incident, the Secretary of State said Iran was be- hind the attacks on two oil tankers in the Gulf of Oman June 13, implicating the nation in the second set of attacks on tankers in the region in two months. U.S. Central Command even released a video it says shows Iran removing an unexploded mine from one of the tankers it’s accused of attacking.

But the Japanese owner of the ship that was damaged denied that it was struck by mines as the U.S. claims, insisting instead that it was hit by “flying objects.” Yutaka Katada, president of the Kokuka Sangyo shipping firm that owns the Kokuka Courageous tanker, told reporters in Tokyo June 14: “The crew are saying it was hit with a flying object. They say something came flying toward them, then there was an explosion, then there was a hole in the vessel. Then some crew witnessed a second shot.”

Iranian Foreign Minister Mohammad Javad Zarif said the United States had “immediately jumped to make allegations against Iran—(without) a shred of factual or circumstantial evidence,” and he accused the Trump White House of “economic terror- ism” and “sabotage diplomacy,” according to published reports.

“So it’s apparent that the Unit- ed States is trying to execute a false flag operation and to throw dust in the eyes of international communities and make the inter- national community feel that the Iranians are the aggressors when in fact it’s Washington that’s the aggressor,” Dr. Gerald Horne, professor of history and African American studies at the University of Houston said in an interview.

The U.S. lust for war is because U.S. interests and allies are suffering, while Iran is making gains in the region, according to Dr. Horne. The U.S. invasion of Iraq has made that country even more dependent on Iran for everything from electricity to security. And U.S. ally Saudi Arabia is fighting a costly and bloody war against rebels in Yemen who enjoy Iranian support.

“Interestingly enough, be- cause of Mr. Trump pulling out of the (Iranian) nuclear deal, the EU 3—Germany, Britain, and France—are trying to set up a special purpose vehicle to circum- vent U.S. sanctions,” Dr. Horne said, “which will then be a threat to the dollar, which is now under siege not only because of the EU 3 but also because of Russia (and) China preparing to conduct trade without the dollar.”

A war, Mr. Trump may be estimating, could “rescue” him politically, and inject more money into the Pentagon. The U.S. “war strategy” was revealed by Reps. Elissa Slotkin (D-Mich.) and Tulsi Gabbard (D-Hawaii) after a House Armed Services Committee meeting and confirmed to The Intercept by Rep. Gabbard. “We were all in that meeting with Pompeo where those statements were made,” Ms. Gabbard said.

The Trump administration is prepared to wage the war against Iran without congressional authorization, based on the notion that the “Authorization for the Use of Military Force” approved by Congress in 2001 after 9/11 can be applied to Iran, through that country’s purported links to Al Qaeda.

Democratic House members and senators, and a host of presidential candidates condemned the president’s saber rattling. “If the administration wants to go to war against Iran, then the Constitution requires them to come to Congress to ask for an authorization for the use of military force,” Sen. Elizabeth Warren (D-Mass.), a presidential candidate told reporters.

“This is Constitutional Law 101, that it is Congress, not the president, that declares war,” Sen. Warren, a former law professor, continued. “We would have to have a debate on the floor of the Senate. And if the administration doesn’t believe that they can with- stand a debate, then they shouldn’t be aiming themselves toward war.”

President Trump told an interviewer on June 13 that “Iran did do it.” In response, presidential candidate and Sen. Bernie Sanders (I-Vt.) told reporters: “Attacks on oil tankers in the Gulf of Oman are unacceptable and must be fully investigated. But this incident must not be used as a pretext for a war with Iran, a war which would be an unmitigated disaster for the United States, Iran, the region and the world.

“The time is now for the United States to exert international leadership and bring the countries in the region together to forge a diplomatic solution to the growing tensions. I would also remind President Trump that there is no congressional authorization for a war with Iran. A unilateral U.S. attack on Iran would be illegal and unconstitutional.”
Posted by Muhammad's Study Group of Grand Rapids, Michigan at 12:10 PM