From the Final Call Newspaper

Why is White Right attacking the first Black president?

What's your opinion on this article?

Though that racially charged conversation may be over, vicious attacks on the first Black President of the United States are not. Analysts say don't expect the attacks to end anytime soon.

The most outrageous charges may have come from radio and TV talk show host Glenn Beck. “I'm not saying that he doesn't like people I'm saying he has a problem. He has a, this guy is, I believe a racist,” he said during a morning show on Fox News Network July 28. The president has a deep seated hatred for White people or their White culture, said Mr. Beck.

“Beck is paid to do just what he did and his remarks represent a psychological game that's being played by people who have no program, nothing positive, and no alternative and it's absurd for them to even start throwing around that Barack Obama is racist when his mother's White and most of his cabinet is White,” said Dr. David Horne, executive director of the California African American Political and Economic Institute, a political think tank in Southern California.

“The criticisms are nonsense and really are the desperate acts of people who don't like being displaced in terms of their image and sense of who they are,” Dr. Horne said.

Since he announced his candidacy, Mr. Obama and his family have been maligned, slandered, and targeted by right wing and so-called independent media hosts. Among those who have focused on largely discredited issues are right wing radio host Rush Limbaugh and self-described “independent” CNN host Lou Dobbs.

Verbal assaults against Mr. Obama have ranged from outright racist insults to doubts about the president's citizenship, his religion, his patriotism and his racial loyalties. Whites known collectively as “the Birthers” have refused to accept proof Mr. Obama, the son of a White American mother and a Kenyan father, was born in Hawaii. They haven't been satisfied by the birth certificate circulating on line, or produced by both the Obama campaign and the state of Hawaii. They aren't alone.

As of mid-July, nine Republican members of Congress were supporting a bill by Rep. Bill Posey (R-Fla.) that would require all presidential candidates to provide their birth certificate.

“These policies and their promoters, many of them are the deep, deep, deep wizards behind the curtains on these attacks on the president and the attacks are part of politics—some are fair, many are not. It's always fair to have a debate about public policy. But personal attacks like the inane and insane point of view that the president is not a citizen of the United States that's, you know, just such a distraction and designed to divide people,” he said.

Mr. Dobbs has focused so much on the Birthers and support for demands that Mr. Obama present a birth certificate that it may be hurting his ratings and causing friction for him with CNN.

“These guys are spouting this rhetoric that's dangerous in terms of public discourse around race. It completely sidetracks the ability of government to do its work, which I believe is these guys' intent here, and at the end of the day ... the reason why Beck is able to say these things on the big platform that he has is because advertisers pay for it,” James Rucker, of ColorOfChange.org, told The Final Call.

In one day, 20,000 people joined the campaign to express their outrage, said Mr. Rucker, a co-founder of ColorOfChange. In addition, he said Fox News Channel has usually been a platform for more sophisticated and subtle race-baiting and racism. Mr. Beck is allowed to make baseless accusations and characterizations of the president and every American, Black and White, should be insulted, Mr. Rucker said.

“The man's mother is White and he got half of this country to vote for him. I don't know how that happens and you're a Black militant at the same time,” he added.

Bill Shine, Fox News' senior vice president of programming, disavowed Mr. Beck's comments the same day they were made. “Glenn Beck expressed a personal opinion which represented his own views, not those of the Fox News Channel. And as with all commentators in the cable news arena, he is given the freedom to express his opinions,” Mr. Shine told TVNewser, an industry news blog.

Since announcement of his candidacy, right wingers have been slinging mud and innuendo at the man raised largely by his White grandparents. They have called him a secret Muslim, a supporter of a Black racist church and pastor, a Socialist and a pampered insider. Mr. Limbaugh admitted shortly after the inauguration that he hoped President Obama failed.

“Barack Obama has one thing in common with God ... Know what it is? God does not have a birth certificate either,” Mr. Limbaugh recently told his listeners.

Mr. Dobbs has come under fire for giving play to the Birthers during his show and critics are calling on CNN to remove him from the network. According to the Associated Press, Mr. Dobbs reported on the issue twice, even though CNN President Jon Klein sent him a memo saying it seemed the story was dead.

A video circulating on the Internet and broadcast over news programs shows an emotional White woman talking about the president at a town hall meeting in Delaware hosted by Rep. Mike Castle (R). “He is not an American citizen ... He is a citizen of Kenya ... I want my country back!” she shouts, waving a copy of her own birth certificate in the air. Applause and cheering can be heard in the background.

“Those fools, the Birthers, have been to the Supreme Court twice and been rejected. They've had five hearings and every single time the legal system has said ‘You have no case,'” Dr. Horne said.

“These are essentially different manifestations of some White men being bitter, being jealous, and being angry because some Black man basically is not in his place.”

Many fear right wing media attacks are revving up extremist hatred and fears that have produced real consequences given that President Obama has received more death threats than any president or White House candidate in U.S. history.

Dr. Horne believes that as long as he is in office, and as long as he's successful, the attacks against President Obama will not stop because criticizing, throwing rocks and character assassinations are the easiest things to do.

Any Obama comment related to a racial controversy or subject seems prone to spark a negative White backlash and then a presidential apology or retreat. The recent beer conversation was more about reassuring White America that everything's ok, and perhaps less about telling Black folks to move on, Mr. Rucker said. Calls for President Obama to apologize, after he said the police who arrested Prof. Gates for disorderly conduct in his own home “acted stupidly,” came as his poll ratings dropped from 61 percent in mid-June to 54 percent in late July to 46 percent in early August. The drops are mainly because of his handling of the economy and federal deficit, according to the Pew Research Center for the People & the Press.

“I think it struck a nerve in America. I think for Black and Latino people it reminded us that things are not as settled as we have claimed them to be in this so-called post-racial era,” Dr. Michael Eric Dyson, of Georgetown University, said of the Gates incident and White House beer summit. The real issue, he argued, is that a Black man called a White man stupid.

“Let's just be real. Even if he's the president of the United States, there's something intolerable about Black judgment of White intelligence,” Dr. Dyson said.

Dr. Joy DeGruy, author of “Post Traumatic Slave Syndrome: America's Legacy of Enduring Injury and Healing,” said those lying in wait for the president will give him room as long as he doesn't overstep his bounds on race issues and the impact of race on Blacks, other oppressed people, societal behavior and governmental systems.

Of all people, Dr. DeGruy said, President Obama holds the perspective of both Black and White because he is bi-racial. 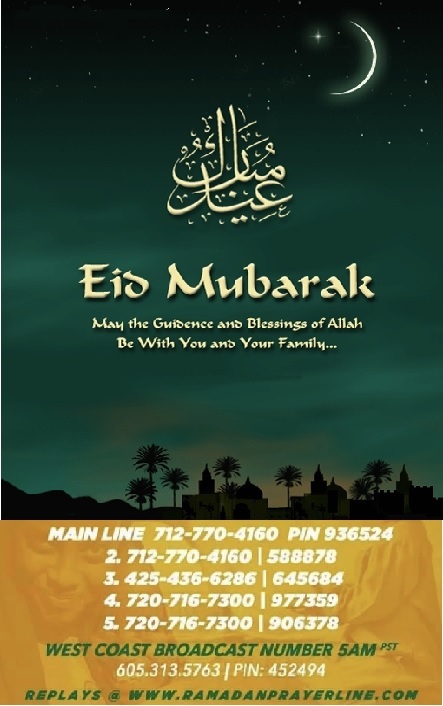 Listen in Live every morning during the Holy Month of Ramadan! 4AM CST / 5AM EST

The Nation of Islam Official Statement On U.S. Capitol Assault